hiiii i totally have ideas for this blog yeah woo uhuh. anyways. i’m going to be doing a short post about my favorite character from goodnight punpun, masumi seki. this character is even at the top of my kin list. i don’t have a kin list, but if i did, i’m sure he would be up there. 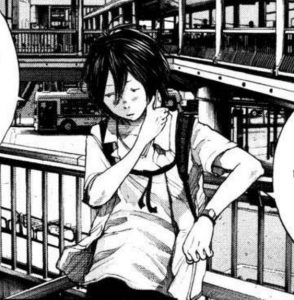 seki was introduced in the first book and was apparent throughout the entire series, but more so towards the middle and end. he is a middle school graduate who skipped high school because he believed book smarts would only help him become a con artist. we’re off to a great start, i know. he has a scar on his nose that he’s had since the beginning of the series, but the origin of it is unknown. he’s best friends with shimizu and is often cold and rough in dialogue. he also has a phobia of fire from an incident at a miso factory, which happens in the first book.

the reason why i feel so closely connected to seki is because of his personality and the way he thinks. he often self-sabotages in his own head, all the time, which is something i believed i was alone in doing. from a young age, seki has had low self esteem. his tough disposition and willingness to fight is compensation for this. early in the series, we see elementary drawings of student’s mothers done by the said students. it pans to seki’s drawing, and his is the smallest of them all, a reflection of how he felt about himself. for someone whose highest level of education is middle school, seki’s thoughts often take a philosophical direction. this internal monologue often depresses him. to distract him from his own head, he applies for many jobs throughout the course of the series.

i have a deep connection to this character. this was the first time my thought patterns and habits were represented in any form of media, and it shocked me. it was something i was almost certain was exclusive to me. and though it was a system shock to learn it wasn’t, it was relieving, as it is an unhealthy habit. i find myself going back and forth on the same subjects as him, just for the both of us to land on the meaningless. i’ve always been a fan of the colder disposition with underlying emotions trope, and that is exactly what seki is. 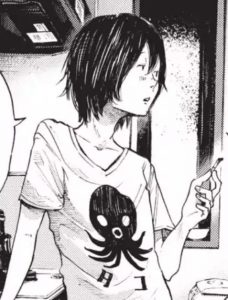 thanks for reading this post !! this was pretty fun, i love talking about this character. to end things, here’s one of my favorite panels from the series !! cya next week<3 ! 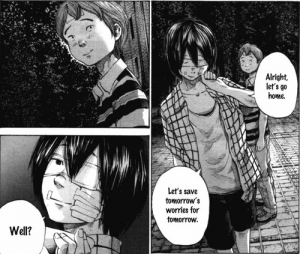 3 thoughts on “why i love seki from goodnight punpun”