Okay, so last week I had made a post about Natasha Preston’s The Fear, and this week I’m posting about Jenny Elder Moke’s Curse of the Specter Queen. 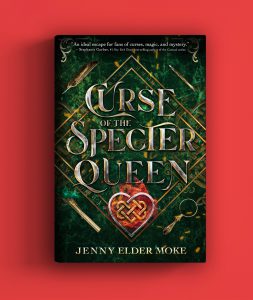 I know as little kids, we’re taught to never judge a book by its cover, but we’ll let it slide this time. So, what do you first notice when you see the cover and read the title in comparison to last week’s book talk? They look pretty different, don’t they? Well, they are. In fact, this is not a book I traditionally read, The Fear is a lot more like all the other books I had read. If you had read it or just my blog about it, yes, you probably should be worried about me. I know my family is. Not about me, but about “what I’m planning”. Anyways, but they are in fact different, from the setting, the plot, the genre. They aren’t polar opposites, but definitely not in the same category or subcategory. The Fear is a thriller murder mystery while Curse of the Specter Queen (we’ll just say CSQ for short) is a fantasy adventure.

Again, I’ll try my best to keep details as brief as possible because I do encourage you to read it, if this is the type of book you’d want to read.

So, CSQ is basically a female version of Indiana Jones with quite a few similarities. It is set in the 1920s in countryside Clemet and the main character, Samantha Knox, specializes in solving cyphers and riddles and works in an antique book shop. When she gets an old diary and a letter full of complex cyphers in the mail at the shop, she attempts to bring it to her boss. She gets back to find there are other ruthless men in search of the diary. The whole adventure takes Samantha, her best friend Joana, and her crush Bennet to Dublin, Ireland where they discover an order with a dark purpose- members of the Hellfire Club(no, not from Stranger Things, but that is kinda funny) seek to summon the Specter Queen, an ancient Celtic goddess of vengeance and death, and bring about a war unlike any other. It’s up to Samantha to solve a complex cypher and find a relic that is a key piece to the summoning ritual.

If I were to rate this book, it’d be a 4 out of 5. It was very detail-heavy and although a lot of parts needed that kind of detail, I felt that some could’ve had some left out and it would still be very good. Some parts were just slightly slow and boring. But, of course, that’s just my opinion and my ADD brain talking. If you enjoy books that have a lot of detail, then I definitely recommend.

But I did very much enjoy that it was very adventurous and it was very much like I was watching an Indiana Jones movie. I loved each of the characters and I think the author did a very good job at making each of their personalities distinct.

That is all I have to say for this book talk, I hope this has encouraged you to read it. See you next week:)