These include several looks from eyeliner, eyeshadow, lips, etc. I included some I would wear on an average day not too impractical. I found l my pictures on Pinterest. I included 10 looks because I can’t say much about them but will describe the process to achieve the look. 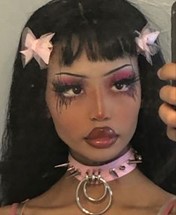 This is look number 1. On the scale of how hard it would be to do I’d say 5/10. You just do the base first of course for all the looks. Then for this look she just blended a pink eyeshadow up to her eyebrow. Then it’s just a simple wing. It doesn’t matter what wing shape you choose to do but hers is a more upward rhomboid shape. After she applied a very light amount of black eyeshadow underneath her eyes. This is to make the eyeliner she drags down to look slightly more blended and natural. Now for the eyeliner underneath. She simply just drags the lines down with an unsteady hand to create a jagged effect. She created some of the lines coming from a separate line also (think of it like lightning.) There are only two more steps. She uses a white eyeliner pencil to exaggerate the size of her eyes by putting it in her waterline and slightly under her eye. Then she glues lashes on and done! 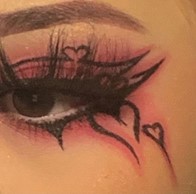 This look is fairly simple if you have a steady hand. I would give it a 7.5/10. You start out with the pink eyeshadow. Take a slightly smaller angular brush and shape out your design. You’re going to want to outline where you plan on putting your eyeliner. For the eyeliner I’m going to provide some tips to make the process slightly easier. I would use a smaller tipped eyeliner pen and do your basic eyeliner shape. This provides a stencil basically for you to outline. I would then take a liquid liner with the handheld brush to outline and fill in the stencil. White in the waterline and some lashes and its done.

This look I’d say is an 8/10. She started by doing a smokey wing and there are three ways to do it. You can do a normal wing with eyeliner then smoke it out with some eyeshadow, I recommend doing this option. Second, you can do the whole wing in eyeshadow. Third, you can use an eyeliner pencil or gel. After you create the wing in your preferred way you can make the inner corner wing. Then the butterfly. This look has a lot of small details so I personally would go straight in with the liquid eyeliner. First make the wing shape and thickness. Then do the details down the cheek with an unsteady hand. Lastly make your inside designs and put on the lashes. She left a gap on her undereye to make the eyes look bigger. If you really want to exaggerate the eye with this, then add white. 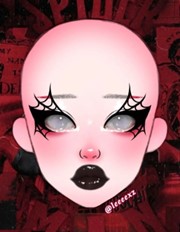 For look number 2, hardness scale of 7/10. She starts out with heavy blush around the eyes and nose for the pink effect. Then it’s just red eyeshadow under the eye an upwards following the shape you’re going to want for your wing. After that you create the wing. Her wing is very large and dramatic which is what I would do as well. She also used red eyeshadow on the tip of her eyebrow, and I don’t know how I feel about that for myself, but I’d try it. For the top spider webs, you basically just follow your eyeliner shape as if you’re bringing it to your eyebrow arch. The bottom set is the same process. You drag your middle line out in line with your wing. The line to the left just comes out and the line to the right hugs your undereye line. Lastly is white in the water line with an eyeliner pencil and highlighter on the inner corner. 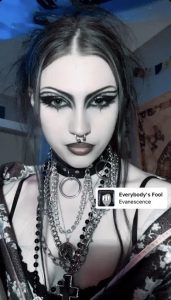 This look is quite simple I would say 5/10. She started with filing her eyebrows in black. Then you just drag that down from the eyebrow to your nose bridge. She aligned this with her eye’s inner corner. Next is the eyeshadow underneath her eyebrow. She just packs and bends the line in the shape of her wing. She then drags that to her inner corner making a small wing there. Next is the eyeline, very simple, just make your desired wing. After that just blend some black eyeshadow underneath the eye. She included a line down the middle underneath her eye that you just do with your eyeliner. Done! 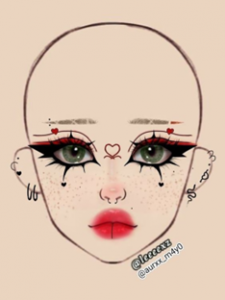 I would give this look a 6.5/10. First, you’d place the red eyeshadow in the crease of your eyelid and blend that out to where you’re going to end the liner. Next, I would personally do the main liner next rather than the design under the brow. Just make your wing low enough to connect to your under eye so you can form the black underneath. Then draw your 4 lines out from the under eye and the little heart under the longest line. Now the upper design you just make a thin line following your main eyeliner wing, then a red heart. Lastly, make your design in the center with red liquid liner, lips and lashes, done! 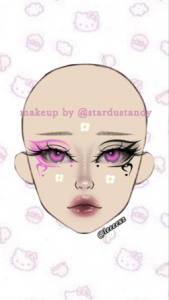 This look I would rate a 7/10. You could do this look in any color you wanted. Its not very many steps. First, make a normal wing dragged slightly under the eye and a small inner corner. Next, you want to start the top design at the bottom of your wing where it thins out and draw your design. The bottom design you follow your eye shape but make it more angular then add all your hearts. Lips and lashes, Done!

3 thoughts on “Makeup looks I want to try one day”