This is a second part to my animal crossing blogs. Today, we are compiling a list of the 10 villagers I dream of being on my island at once. If any of these villagers wanted to move in I would kick anyone else out :D. Let us begin.

Ankha is a snooty cat villager. I’m sure we all know why I want Ankha on my island but that is a secret. She is based on Ankh, an Egyptian hieroglyphic character that reads “life”. Ankha loves cherries and is allergic to apples. Her birthday is September 22nd (the day before mine) making her a Virgo. Her catchphrase is me meow, and her quote is “All that glitter is not gold.” Her hobby is the play hobby.

Bob is a lazy cat villager. Now, I have no reason to want bob. Just look at him. Who would not want Bob on their island. His birthday is January 1st, he is a Capricorn. His catchphrase is pthhpth. His quote is “You only live once…or nine times.” Bob likes Kilimanjaro coffee. His hobby is play. Bob was the first villager designed in animal crossing.

Sasha is a lazy rabbit villager. Despite the looks, Sasha is a male villager and the first and currently the only male villager with the fashion hobby. Sasha is a May 19th Taurus. His catch phrase is hoppity, and his quote is “Timing is everything.” I also don’t see his favorite coffee, but his favorite songs are K.K. Lovers and K.K. Robot Synth.

Coco is a normal rabbit villager with the education hobby. Coco is the only villager whose face does not change or make expressions. She is one of the only few villagers who are technically not animals. She is based off a coconut. Her catch phrase is doyoing, and her quote is “Don’t put off till tomorrow what you can do today.” She is a March 1st Pisces. Her skill is writing backwards, and her goal is to be an astronaut. Her favorite coffee is mocha, regular amount of milk, and two spoons of sugar. 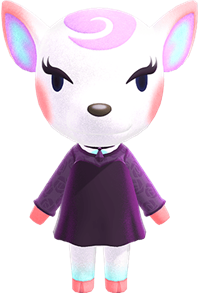 Diana is a snooty deer villager. She is also the only deer villager with that personality. Her name comes from Diana, the roman goddess of the hunt, whose symbol was a deer. She has the education hobby. Her catch phrase is no doy, and her quote is “Sometimes you have to lose to win.” Her skill is playing poker and her goal in life is to be a dermatologist. Her favorite coffee is Kilimanjaro.

Lily is a normal frog villager. She has the education hobby. She is a February 4th Aquarius. She has a skill in calligraphy, and the goal to be a professor. Her favorite coffee is mocha, a small amount of milk, and one spoon of sugar. Her name derives from lily pads. Her catch phrase is toadally or toady, and her quote is “Don’t jump to conclusions!”

Stitches is a lazy cub villager. He is based off a young child’s worn stuffed animal. This is also the reason for the child like furniture in his home. He is a February 10th Aquarius. His catch phrase is stuffin’. His quote is “A stitch in time saves nine!” His skill is forgetting things and his goal is to become a lawyer. He likes his coffee blend with a little milk and one spoon of sugar.

Ketchup is a peppy duck villager. She can only move into a village if the player has her e-card. She has the play hobby and is obviously based on a tomato. Her catch phrase is bitty, and her quote is “When in doubt, eat a tomato!” Her skill is chopping vegetables and her goal is to be a pop star. She like Kilimanjaro coffee with a little milk and one spoon of sugar.