All images and lyrics belong to GHOST.

GHOST, also known as Ghost and Pals, is one of my favorite musicians of all time. Their unique art style showcased their videos, wonderfully written lyrics, and interesting themes in their music are all things I really admire and always have me pumped for a new release. Ghost, which I will stop capitalizing from now on for the sake of being a bit easier on the eyes, is one of the most popular English Vocaloid producers. More popular releases of theirs include Honey I’m Home, Housewife Radio, and Candle Queen.

If you’re reading this and you’re not sure what Vocaloid is, that’s completely understandable! Vocaloid is a Japanese singing voice synthesizer software that enables users to synthesize “singing” by typing in lyrics and a melody for various voices or characters. It stems from a real voice actor’s or singer’s voice, much like Siri! These characters are designed and treated like virtual idols of sorts, and you’ve probably heard of a few. Hatsune Miku, Gumi, Megurine Luka, and Kaito are the most popular Vocaloid voices to use, and their characters are super recognizable on and even off the internet. It grew in popularity across the world in the mid-2000s and continued to skyrocket. The most well known English Vocaloid producers include Creep-P, VocaCircus, Crusher-P, Steampianist, and, of course, Ghost. The main appeal of Vocaloid is the unique sounding vocals that give off a robotic and interesting sound and the control it provides in music production.

Now, let’s dive into the meat and potatoes of this post. Appetite of a People-Pleaser was released on January 23, 2018, and, as of writing this, has accumulated almost 4.5 million views. Ghost uses v4 Flower, a lesser-known but still popular Vocaloid in the community. It tells the tale of a girl who’s so obsessed with becoming the ideal and pleasing others that she starts to lose touch with her own identity after the following mental anguish she faces realizing the negative consequences of this. The song has a few different interpretations, and since it’s one of my favorite songs of all time, I thought why not write a blog going into it?

The video starts out with a content warning for themes of disordered eating. The video does include depictions of bulimia nervosa and binge-eating disorder, but I believe these are metaphors for the character’s addiction to the validation of others. I’ll go into further detail later on. So, like the video says, if you think these subjects could upset you, I’d recommend you carry on with caution. 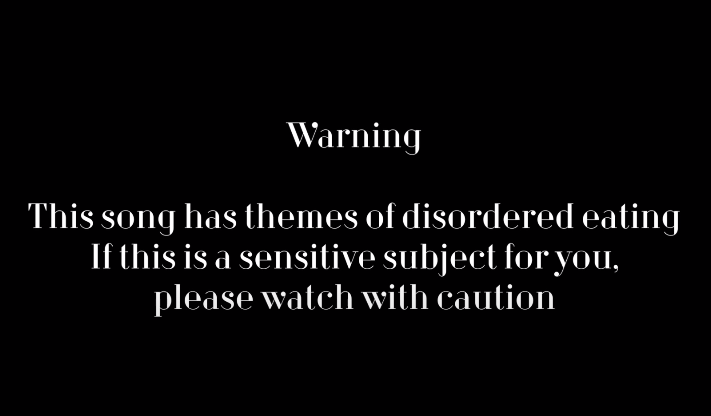 In the first shot of the video, we see the hand of a young girl, who I will call Flower for the rest of this post, holding a fork and going in to taste a cake on a plate in front of her. She takes a tiny bite before exiting from the frame. The cake here represents the validation of other people, and this was her first real taste of it. 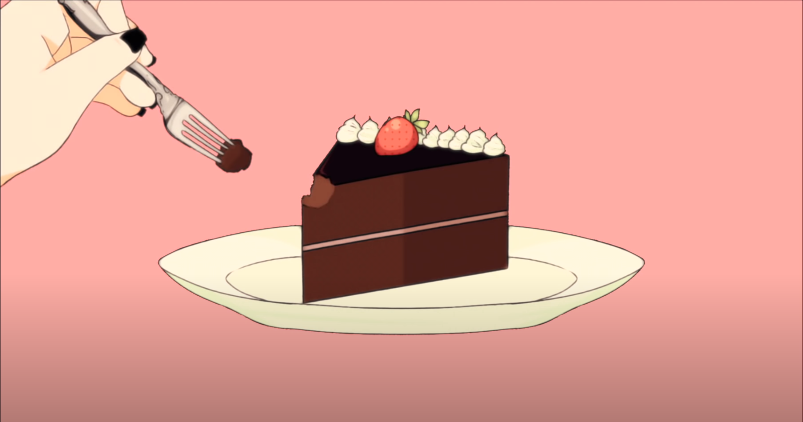 Soon after, the song starts and the lyrics appear onscreen.

“Ideas forming out of thin air
These indulgences none can compare
So many flavors that one would abhor
Even though I’ve had enough…
I still demand:
Give me more!”

Here we see Flower beginning to build a dependence on the validation she tasted with the cake. “Ideas forming out of thin air; these indulgences none can compare” could either mean she’s thinking of ways to better please her friends and peers to an excessive degree, or that she’s having negative thoughts of herself and needs the validation of others to have them go away. “So many flavors that one would abhor” could refer to the many personalities she’s created to please others, but could also refer to personality traits that she thinks poorly of. “Even though I’ve had enough, I still demand: give me more!” is a cry from Flower for more validation from others to the point where she even sees it as a possible problem. 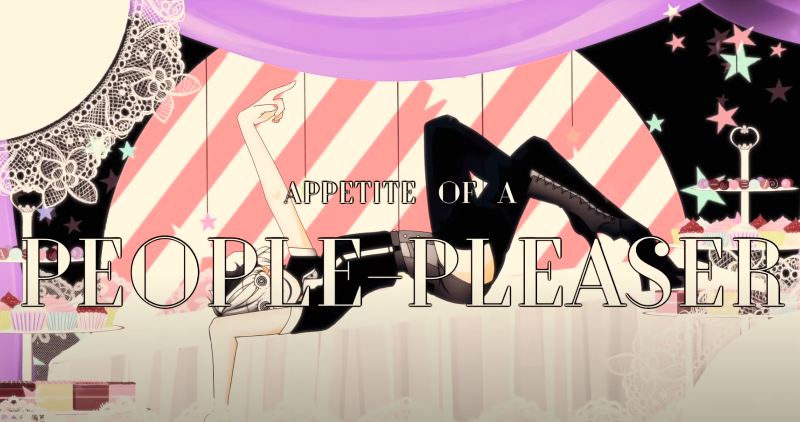 “I need a whole personality
Something inordinately sweet
Order anything you’d like
Nothing’s changing my mind
I don’t care how unhealthy it is
Because there isn’t anything I’d rather be.”

“I need a whole personality; something inordinately sweet” relates to her need to change her entire personality to suit other people, and for this time, she needs something “inordinately sweet.” “Order anything you’d like; nothing’s changing my mind” shows us that she’ll continue to cater to people regardless of the concerns of others or for the sake of her mental health. “I don’t care how unhealthy it is because there isn’t anything I’d rather be” shows that she’s aware of the negative consequences that could come from this, but she loves the results of her people-pleasing so much that she continues. The graphic depicts her with a tranced and obsessed look on her face as if she’s being driven crazy by the validation and love she’s getting from others. 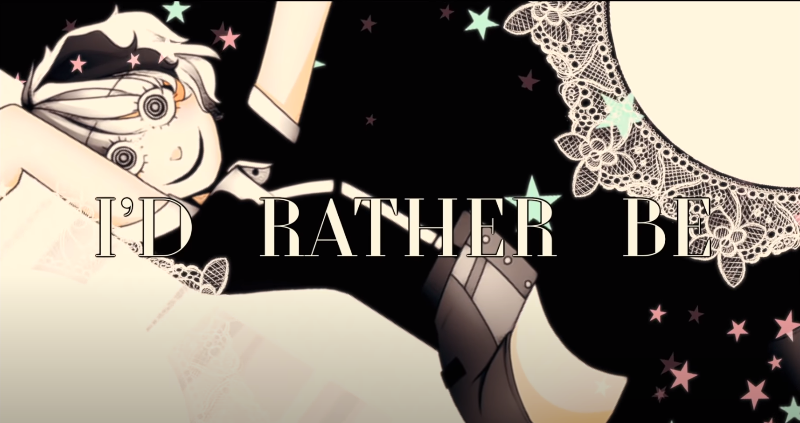 “Call me obsequious, I guess I’m a bit dramatic
Sometimes my appetite is eerily erratic
Give me your dire expectations, and I’ll consume perfection
You are what you eat, after all.”

“Call me obsequious, I guess I’m a bit dramatic” shows us that others, or possibly herself, call her obsequious (to be obedient or servile) and can notice what she’s doing, but she brushes this off by saying she’s just “a bit dramatic.” “Give me your dire expectations, and I’ll consume perfection;
you are what you eat, after all” ties into the metaphor of her people-pleasing being an eating disorder. She consumes all the expectations of others and becomes them. She considers this perfection. 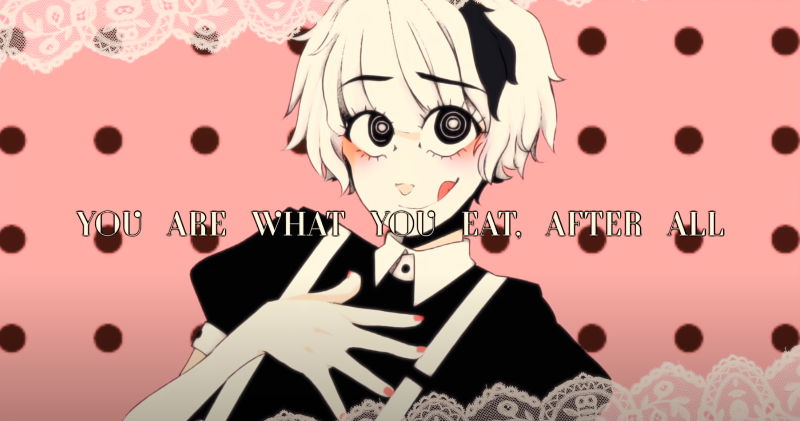 It’s at this time that the video theme and tone of the music shifts. The vocals become distorted and the piano grows louder and more ominous. The bubbly and colorful background is now replaced by a somber black one with classical designs.

“Everything
Combines into one
So many flavors that one would abhor
I know I’ve had enough, I’ve gone too far.”

This marks when the negative effects of Flower’s behavior start to break through. “Everything combines into one; so many flavors that one would abhor” shows that her personalities are beginning to meld together into an amalgamation that she thinks is unappealing and undesirable. “I know I’ve had enough, I’ve gone too far” shows that she recognizes that she really does have a problem, but she’s gone too far down the spiral. 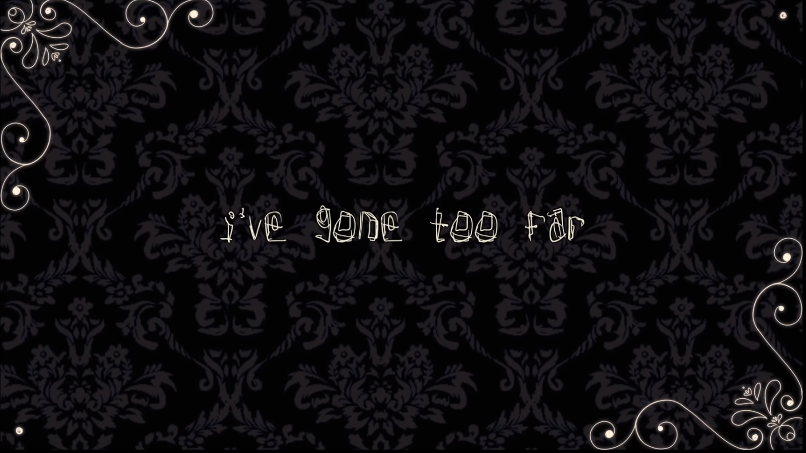 This tone change quickly goes away much like it appeared, and soon we’re taken back into the candy and cake wonderland of the video. The lyrics, however, keep this concerning and somber tone.

“Now that I’ve become a full-course identity
Take a bite of me
I hope that I’ve become a favorable delicacy
That I’m worth something
I’ll eat ‘em all, the thoughts of anyone I’ll ever meet
Just to make them happy
Wondering why I’m a burden, or so it seems
Aren’t I everything?”

“Now that I’ve become a full-course identity; take a bite of me” demonstrates that she’s done crafting a personality for someone and she wants them to enjoy her and give her validation and love. “I hope that I’ve become a favorable delicacy; that I’m worth something” reflects on how she only gets self-worth from others and how she can only hope she was successful in becoming their perfect person. “I’ll eat ‘em all, the thoughts of anyone I’ll ever meet just to make them happy” shows how she won’t stop absorbing the thoughts of others to “improve” herself because she wants to make people happy. Every comment, insult, or recommendation gets turned into an ingredient for her personality so she can appeal to them more and get them to like her. The next line, “wondering why I’m a burden, or so it seems; aren’t I everything?” is a glimpse into her inner worries about this. People are growing tired of her presence because of her people-pleasing tendencies and she’s confused as to why because she’s put in so much time and effort into crafting the perfect person for them. 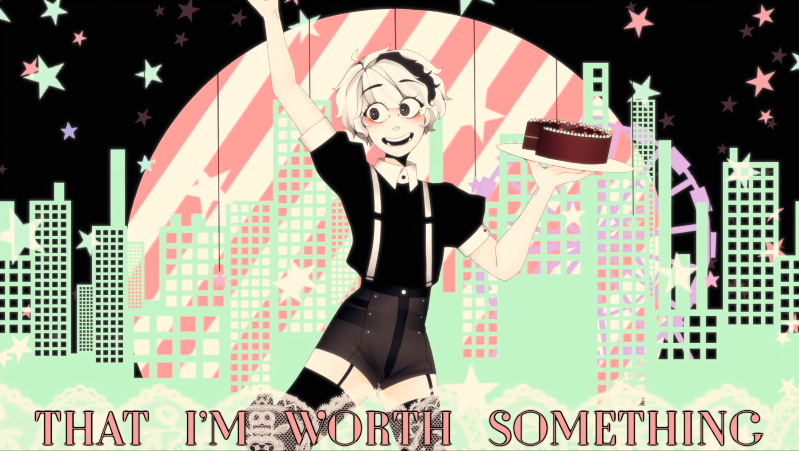 “Maybe if I try a little harder, it will be okay
One day
Keep on eating more and more.”

Even though her people-pleasing is the reason people are starting to distance themselves from her, she doesn’t know what to do. Instead of trying to stop and try being herself, she begins to work even harder to please them so they won’t leave her. The graphic shows Flower devoring more and more of the cake (validation) to keep her satisfied, and she now needs more than ever. 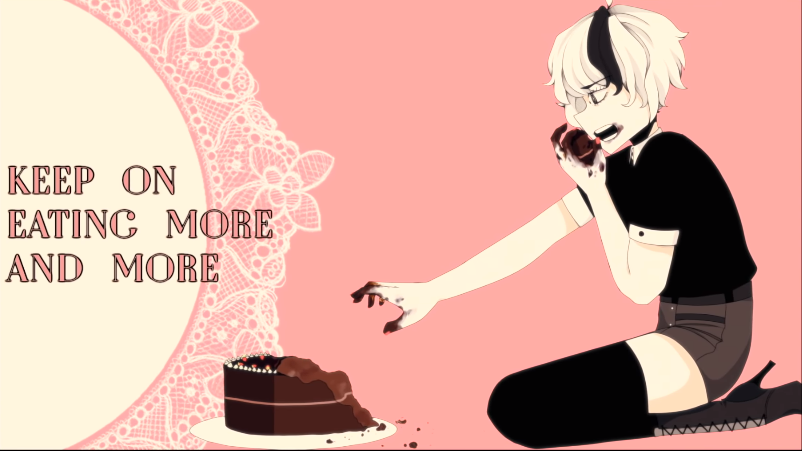 “Divide my life away
Into servings
And go beyond the point of no return.”

Flower is now reaching the point where she is almost beyond help. She’s devoted her life to other people and has left no time for herself to heal. She’s losing more and more parts of herself every day. 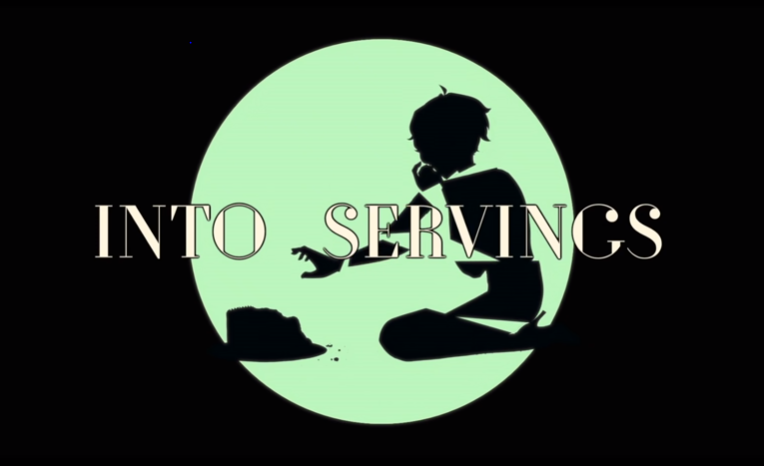 “I know I’m subservient, but all of this is necessary
Sometimes my appetite is violently contrary
Irreconcilable perceptions appeal to my obsessions
The nausea is overwhelming!”

“I know I’m subservient, but all of this is necessary” shows once again that Flower knows what she’s doing isn’t completely appealing, but she thinks it’s the only possible way for people to like her and has become her main focus and goal in life. She’s become addicted to validation from others and needs it to function, so she will stop at no limit to get it. “Sometimes my appetite is violently contrary” suggests that Flower may be the exact opposite of the way she acts, but she continues anyway because she doesn’t know how else to be. “Irreconcilable perceptions appeal to my obsessions; the nausea is overwhelming!” shows us that the toll all of this is taking on Flower’s mental health. Everything is stacking on top and making her overwhelmed and nauseous, but she’s lost the ability or will to stop. 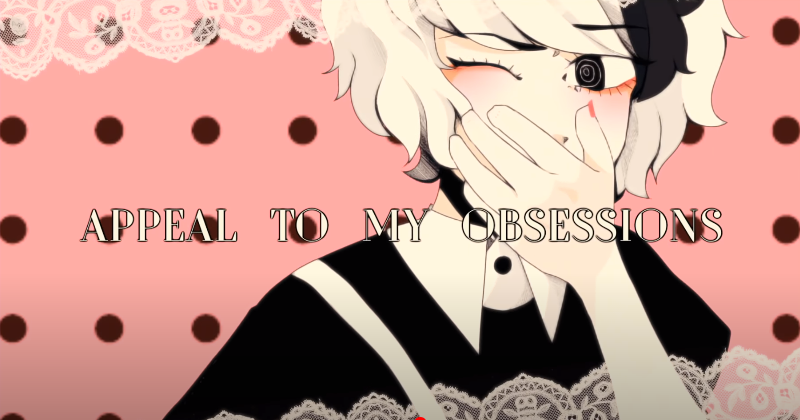 I should probably stop before this blog gets too long, so I’m going to be splitting this “analysis” into two parts. Most of this song is pretty self-explanatory, but I just wanted to talk about it and share GHOST’s work with more people! I’m excited to continue this. I may do one for Honey, I’m Home and Housewife Radio afterward since I’m actually really enjoying working on this! They’re a bit more complicated, so we’ll see how it goes. I guess I’ll have a lot of content for blogs if I go through with this idea! 🙂