In 1971, photographer, Victor Baldwin, photographed his Siamese kitten, Sassy, hanging on to a bamboo stick for his book, The Outcast Kitten. After increasing demand for the photo, once the book was released, Baldwin decided to print posters of the image with the words, “Hang in there, baby”. The poster became a staple for motivation and inspiration. Reportedly, people wrote to Baldwin expressing gratitude, as the poster helped them through surgery, financial hardship, and other trying times. Now, the original image is considered a collectible.

However, many people have never even seen the original image, but popular imitations. The picture on the left, for example, has been recreated and modernized to appeal to younger audiences.

If you were to ask current high school juniors and seniors what comes to mind when they hear the phrase, “Hang in there, baby”, I’d be willing to bet that half of them would say the theme song of a popular Disney Channel show, Good Luck Charlie, and the other half might say the modernized kitten poster. However, this is just an assumption. In order to get factual data, I posted a question forum and actually asked current juniors and seniors what they thought, and then recorded that data in this bar graph: 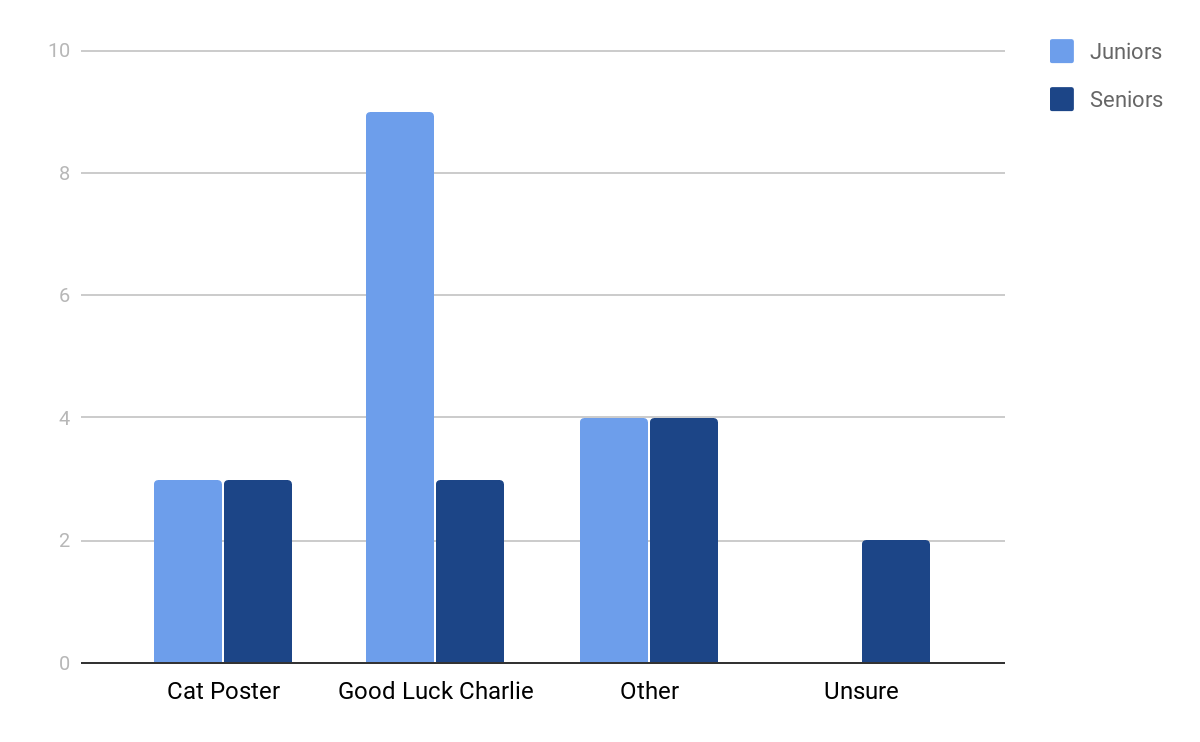 Although most people voted for Good Luck Charlie, it wasn’t quite half of the 26 who responded, so while my bet was misplaced, it wasn’t so far-fetched.

This study seemed silly as I was conducting it, but it made me realize something: catchy theme songs and quirky posters like this bring so much nostalgia. It’s amazing how a song or an image can transport you back to childhood in an instant. It’s something that I take for granted, much like our country’s current situation. You don’t realize how significant going to school or going grocery shopping really is until you can’t do it anymore.

In the ’70s, a single photograph with a cheesy caption inspired so many, but where’s our photograph now? At a time when so many need encouragement, where do we turn? I say, to each other. An image isn’t going to solve it all, but I’ll admit, it could help. Maybe the image could bring people together in a time when we are supposed to be kept apart.

Now, I’m no photographer or influencer who could reach thousands, but I do have a small community within my school. This is what inspired me to create a virtual spirit week for everyone to get involved. So, it doesn’t matter if you, too, are not a photographer or an influencer, you can still make a difference within your community. I encourage you to— especially to those who are seniors in high school. Many of you will not get to experience some of the most fundamental things in life, and for that, I am truly sorry. I hope that this blog inspires you to, in some way, take back some of those things that were taken from you. We live in a world where almost everything runs on technology and social media— use it! Take advantage of your resources and get creative.

I say all of this to say: be grateful, make a difference, and hang in there, baby.

I wrote a poem about how I’ve been feeling in light of our current situation. I thought I’d include it here for those who may be feeling the same way.

Life As We Know It

The sounds of typing and the rundown washing machine fill my ears. It’s a noise I’ve grown accustomed to, after what feels like a lifetime. Truthfully, I don’t know what day it is, so don’t bother asking me.

The feeling of having nothing to do used to be a sigh of relief, but now it’s given me a sense of hopelessness.  Has this become my new normal?

I believe in an open-door policy, but the thought of another 6 weeks with my mother makes me want to lock my door and throw away the key.

I wish people’d stop telling me to wash my hands, as if that’s going to make it all go away.

Things are put into perspective when people die. I wish it were like that before they died.

God, is that you?

It’s funny how I miss the things I used to hate: stairs… chicken sandwiches…  curfew.

Is this how Anne Frank felt during the Holocaust?

What day is it again?

One thought on “Hang In There, Baby”