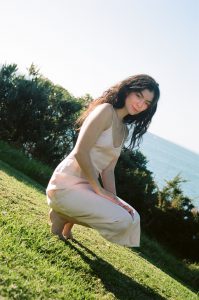 Here I am again with the next installment of analyzing the Solar Power album, by Lorde. I hope you’re finding your paths, and if it led you here, well you’re more than welcome to stay. Last week I mentioned how this is going to be my initial listen to the songs, and then I will put in my raw thoughts. Last post’s ending song was California, so we will continue from there. Again, feel free to listen along as you read my personal takes.

4.  Stoned at the Nail Salon

Your dreams and inner visions, all your mystical ambitions
They won’t let you down
Do your best to trust all the rays of light
Everybody wants the best for you
But you gotta want it for yourself
My love

Welcome to Sadness
The temperature is unbearable until you face it
Thank you for flying with Strange Airlines
I will be your tour guide today
Your emotional baggage can be picked up at Carousel Number 2
Please be careful so that it doesn’t fall onto someone you love
When we’ve reached your final destination, I will leave you to it
You’ll be fine
I’m just gonna show you in, and you can stay as long as you need to get familiar with the feeling
And then when you’re ready, I’ll be outside, and we can go look at the sunrise by euphoria mixed with existential vertigo?
Cool
Raw Thoughts:
Wow. This one hit me a little differently. It is almost hard for me to analyze it because right now I’m so in my head emotionally about what secrets Lorde just let me in on. Although, I think that’s good writing! It’s thought provoking and kept me engaged from the lines.
The song does a great job of following the album’s theme of journey and getting older. There are so many shifts of mindsets throughout after she has learned “the secrets.” It’s a lot of meaningful messages too, in my opinion. All the messages are things that seem obvious, but while in a teenage mindset… just aren’t. Although I am not a girl, I still just felt a certain type of way when I heard “the secrets.”
I think this song should be a part of the education system for teens. If this song was heard across the masses then so many heartbreaks might be prevented. We could elevate as a society. Just an idea ♥
7. The Man with the Axe
Lyrics
If I had to break it down
I’d say it’s the way you love to dance
Moving the furniture when my back is turned
A flick of the lights and the world falls away
And your office job, and your silver hair
But our shapes in the dark are the reason I’ve stayed for all these years
I thought I was a genius
But now I’m twenty two
And it’s starting to feel like all I know how to do is
Put on a suit and take it away
With my fistful of tunes that it’s painful to play
Fingernail worlds, like favorite seashells
They fill up my nights and then they float away
I’ve got hundreds of gowns, I’ve got paintings in frames
And a throat that fills with panic every festival day
Dutifully falling apart for the princess of Norway
But you with your doll’s lashes, your infinite T-shirts
I should’ve known when your favorite record
Was the same as my father’s, you’d take me down
I guess I’ll always be this way
Swallowed up by the words and halfway to space
But there by the fire, you offered your hand
And as I took it, I loved you, the boy with the plan
You felled me clean as a pine
The man with the axe
And the light in his eyes
We’ve been through so many hard times
I’m writing a love song
For you, baby
Raw Thoughts:
This is definitely the ballad of the album.  My primary thoughts were how this love song correlated with the rest of the album. I suppose this is showing her personal life, so we as an audience understand her own personal growth. I feel like with the other songs we only got glimpses, but in ways that also helped us. This song seems a lot more personalized and specific.
It seems like a mood for love that is young, or at least it still has that giddy feeling of young love.
A metaphor I thought was very clever, “But our shapes in the dark are the reason I’ve stayed for all these years.” She had a way of using the figurative language to tell so much without saying it. I love the illusiveness. It almost in ways keeps the full experience her’s. This song is so revealing yet not at all at the same time. That’s an amazing trait for a piece of writing to have. It’s hard to explain.
I really enjoyed this segment of analyzing Lorde’s magnificent new album, Solar Power. Diving in to the journey of listening to an album about a journey is very cool. I feel like as Lorde is revealing, yet more of her life, I’m still growing along with her. It’s so rad.
Well that’s all for this post, but I want you all to keep learning helpful secrets and maybe…don’t eat all the fallen fruit 😉