not too long ago, i was introduced to a manga series by a close friend here. i was immediately intrigued, especially so when i heard about the progression the series goes through. so, i borrowed the first volume from my friend and began reading. and that changed my life. 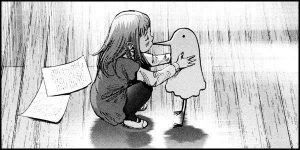 just a series about a cute bird-boy, right?

wrong. it’s so much more than that, and that’s why it has changed my view on so many things, even my own life. we start off following the life of elementary student punpun onodera as he navigates through school, his dysfunctional family, and a girl he truly believes is the one. you feel so much sympathy for punpun solely based on his appearance, which is a key detail prominent throughout the entire series. as he grows older, and as he experiences everything his life has to offer, he changes, and not for the better. we follow him at ages 11, 13, 16, 19, and finally, 22. in the beginning, punpun’s life is more than relatable. things i’ve been through that i thought no one else understood were represented in this book. that being said, it touches on some sore subjects. (so if you plan to read it, ask me about the trigger warnings!) i had to have some parts blocked out by my friend so i wouldn’t read it</3 (it gets that real). but as the series progresses, and as punpun ages, he becomes less and less relatable. the things he’s been through start to eat away at him, and he becomes violent and angry, and then a raging depressive.

so, what does his appearance have to do with anything?

punpun’s appearance is one of my favorite aspects of this series, and arguably the most important one. as an elementary school student, when we first meet him, punpun is very short and rounded. as he becomes a pre-teen, he elongates. even more so when he is in his mid-teen years, and as he starts to become a young adult, he has more appearances with a human body. not only does he have a human body in the later part of the series, but his face shape changes depending on his mood. when extremely depressed or angry, he is usually pitch-black with varying amounts of uh, eyes. i still haven’t finished the series so i have no idea how he will look by the end of it. i mean, at one point he’s a tetrahedron, so. but it all is insanely significant, i promise. 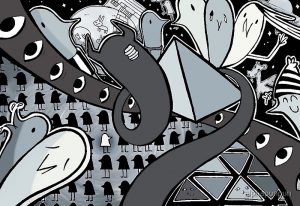 so uh, what’s the point of reading it?

WHY NOT. seriously, why not. no, i’m kidding. there’s a lot more reasons why i think it’s a great read, but i don’t have many as to why YOU should read it. personally, this series has changed my life  (so far, i’m almost finished with it though!). i’ve been struggling with certain things for a while now, and somehow this series touched on all of those memories. it’s comforting to me, in some sick twisted way, because i know i’m not alone in these thoughts. (not uhh his thoughts in the later half, that guy gets weird). but, that doesn’t mean you should read it. it gets real, and it gets serious. like i said, if you’re interested, come to me and i’ll tell you about what you might need to look out for. if you don’t think you can handle it, then that’s okay!! it’ll still be here if you ever change your mind(: but i promise, reading it won’t be a mistake. anyways, that’s all i have for this week. see you later.

3 thoughts on “goodnight, punpun (and how it has changed my life so far)”