Welcome to my blog. In this one I am gonna talk about my favorite video games. I like making lists and steps so that’s what I’ve been doing. Basically, I’m going to provide the name, a picture, and a little description of the game. As a bonus I’m going to include with youtuber I enjoy watching play it the most. Enjoy!

This game is an all time favorite. I have been playing it since around 2016. This game is a life simulation game. You create a home or use a pre-built home for the beginning of your desired life story. After, you create 1-8 sims (the characters) for your story line. The you plot them in the house and force them to do your bidding :D. There are millions of story lines to play out and its 10x’s better with mods though. I personally have a very heavily modded sims game (80 GB mod folder). But its not about the mods the game is equally fun to play without. 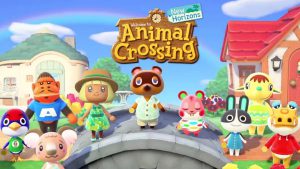 In the number two spot we have Animal Crossing. I know I know kinda basic, but I really enjoy this game. It is a very big stress and emotional reliever for me. In this game you are flown to an island of your choosing. You get three random island formats and choose which one to start your new life in. Basically, you build this island from the ground up. You start out with two villagers and tents. The island is covered in weeds, and you clean it up to begin the first ceremony. From there you continue to make the island beautiful to your liking. The game considers your journey over once you hit a three-star island rating BUT it definitely isn’t over that is just the main goal. You proceed to upgrade everything and your home. You in total unlock 10 villagers, a museum, nooks cranny (store), and the resident services along with many other small npc characters that visit your island. 😀 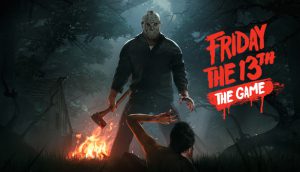 I love playing this game. I play it usually with my significant other and who ever randomly joins our lobby. Friday the 13th is an online survival type game. You must escape Camp Crystal Lake while Jason is on a mission to kill all of the counselors. During him chasing everyone you collect supplies and a weapon for the journey. After that you have 4 ways of escape that I am aware of. Starting at the easiest is the 2 cars. There is a 4- and 2-seater vehicle on each sides of the map. You have to find gas, keys, and a battery to repair the cars then drive out of the camp. Jason can and will stop your vehicle by smadshing is. If you get to that point, then good luck to you. Option 3 is a boat. You find the boats propeller and gas to repair it. This is option three because the propeller is very hard to find and there is only one in the map. Once you get it repaired you drive it away but Jason can pull you right out the boat and he swims faster than it. Now option 4. The hardest option. I have only done this once in the 2 years I’ve played the game. Killing Jason. To kill Jason, you need several things. His mask, his mother’s sweater, a female character, Tommy Jarvis, and many weapons and people willing to help you. First you call tommy. He will arrive as one of the already deceased players with a shot gun. Tommy is there to help you kill Jason. Now the female character is important. This can be anyone with a female avatar. She must put on his mother’s sweater and lure Jason. The mask is to weaken Jason and it just sits in your inventory. To get it you have to fight Jason until it falls off then just pick it up. After this is done Jason goes into a frenzy and it makes him easier to fight. Then boom done he’s dead. That’s Friday the 13th.

This game right here I’ve had a love for since I was a kid. Its an indie horror game that I can talk about till my jaw falls off (This gave me an idea for the next blog. Key word: lore). Anyways, there are 13 of these games but I cannot choose one. Basically, in these games you are put in different scenarios in each game where you must survive several animatronic animals. These animatronics are trying to brutally murder you. In each game there are different means of survival so I can’t really tell you how to survive. There is SO MUCH lore behind every single one of these games, but I enjoy them very much. The lore keeps me alive right now. I know I didn’t say very much on this game, so I’m going to talk a little about FNAF one. In FNAF one you are stationed in a small security office. On your left and right are sliding doors. This game relies a lot on sound. If you listen, you can know where these animatronics are without using the camera. There are a set of security cameras offered to you where you can see each room. These are only useful for the first 2 nights really. The animatronics will randomly pop up at your door meaning you need to shut the corresponding door. You use the lights to see if they’re still there. Now, you can’t leave these doors shut because you have a power supply that drains very quickly, and the more power you use the faster it depletes. You do this from 12 AM to 6 AM. Once 6 hits you’ve completed night one. There are 5 nights (obviously) along with a hidden 6th night that is very hard to complete. 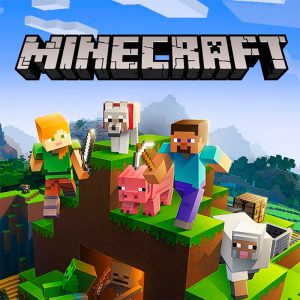 You guys should’ve known I was bringing Minecraft into this. I don’t have much to say so I’m going to get into the gameplay. You spawn randomly on this big, pixilated world with no means of survival. You start by collecting a necessary material, wood. From this wood you make tools and gather items and food. Eventually you will mine netherite, the strongest mineral in Minecraft, to make tools from. You build shelter, start a garden, get companions, and survive. You can also take another rout where you “complete the game” though you don’t actually complete it. You find an underground fortress where you then find an incomplete portal. From there you make a portal to the end and kill a dragon, the ender dragon. From there it will roll credits then spawn you back at your last spawn point.