Okay, finally at the final part of this series. I am very sure that there are others who deserve their own spotlight in this, but I’ll save those for later on down the road. I’m sure that hearing me obsess over the MCU is getting slightly annoying. So this is the last part, for now:)

For those who remember last week’s post, you most likely know who this is going to be about. But for those who don’t, let me introduce Loki Laufeyson 😀 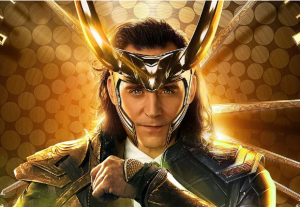 First off, there is a lot to be said about Loki. I think out of all of the characters, he showed the most character evolvement, but that’s just my opinion.

Was he a villain? Yes, for a while. I mean, he’s literally the God of Mischief, his whole thing was being the villain. But no villain goes without reason. For those who are unfamiliar, Loki is the adopted brother of Thor, and it wasn’t until he was a grown adult that he learned that. His “father”, Odin, took him in as baby during a rampaging war in hopes that he would later be used to form an alliance. He was brought in the family as a political token. He was always treated like he wasn’t truly a part of the family and now he knew why.

But, in all honesty and I know this is an unpopular opinion, I don’t think that justifies the things he did during the movies Thor and The Avengers. He still chose to do those things with his “kneel or be killed” perspective.

But, from Thor: The Dark World forward, there’s a gradual change in that perspective. Even though it wasn’t one of Marvel’s best movies, I still think it’s underrated because I feel it was important to show that Loki isn’t just the God of Mischief. There’s another side to him that Odin chooses not to see and that Thor just isn’t aware of until later in the movie. The film shows that he was closest to his “mother”, Frigga, when she attempts to make him feel as at home as possible even though he was being imprisoned for his actions done in The Avengers by bringing him books and making his cell feel more like an actual room.

Loki was heartbroken when Frigga was killed and even more so when he couldn’t go to her funeral.

At the end of the film, Loki sacrificed himself for Thor, and the more human side to him is revealed. Of course, his “death” was faked and that’s when we come into Thor: Ragnorok. This is the film in which Loki learns Thor always saw him as his blood brother and didn’t hold the grudge against him even though he was ultimately responsible for Odin’s death (he had it coming, but that’s just my opinion). They become closer as siblings and Loki saw that Frigga wasn’t the only one who loved him like real family.

Just because this is my favorite scene from the film, here’s a youtube video

Of course, they do end of fighting side by side to save Asgard from their sister, Hela.

In Infinity War, which is the saddest film in the MCU, just under Endgame it shows who Loki really is. The reason I say that is in my opinion the one thing that shows who a person truly is on the inside is their actions during their last moments. At least, if they know they’re at their last moments.

During Loki’s last moments, he makes an attempt to trick Thanos in order to save Thor which shows that, in the end, he would protect his family. That is a lot of character development. One of the saddest lines from the movie is when Loki said, “I assure you, brother, the Sun will shine on us again”.

Now, into the series Loki, for those who are familiar with it but have not seen it, it is based from the scene in Endgame when 2012 Loki steals the Tesseract once again and escapes. There is a lot that happens in this series and I highly recommend watching it, but to keep it short and sweet, he starts out as wanting nothing but control and a throne and was willing to lie his way to get it but all it took was a couple of people to show him that he is more than what he thinks he is.

I strongly feel that Loki deserves better because his story shows that even the most narcissistic, pathological liar can change their ways. All it takes is someone who genuinely cares to show them that they can.

Well, that’s the end of the series for now. I think this was a good conclusion to it, you guys let me know:)