Hello again, if y’all remember last week’s post I opened a series of characters in the MCU whom I personally believe deserve better and they’d be listed from the one I feel strongest about to the least. To start, I did Bucky Barnes. For part 2, I will be doing Wanda Maximoff/Scarlett Witch. 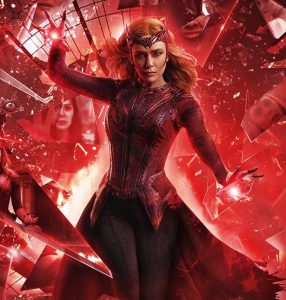 Wanda Maximoff first made her appearance in Avengers: Age of Ultron when it was her and her twin brother, Pietro. In the beginning of the film, they are introduced as “enhanced” as it was referred to in the movie who chose to volunteer as experiments for Hydra. They both had a hatred for the Avengers that began at the time of their parents’ tragic death and they saw that the weapon used was from Stark Industries.

After the last Hydra base was taken down, the twins meet Ultron who has an equal hatred for Tony Stark and he believed that he could save the world but was actually going to destroy. When the twins discover this, they side with the Avengers and save the the people of Sokovia(a made up European country). However, things take a dark and very tragic turn when she loses Pietro to him sacrificing himself to save Hawkeye and a young Sokovian boy.

In CA:CW, Wanda and Vision began to become very close, even though they chose opposite teams. And in Infinity War, she and Vision get together and she feels like she’s gaining a new family. Some of my favorite but most heartbreaking quotes in that film are the “I just feel you” parallels. For those who haven’t seen it, that sentence wasn’t referring to anything physical, it was more of an emotional “feel”. You’d have to watch it to understand. And, of course, because Vision had the Mind Stone that Thanos was after, he was killed.

Wanda felt that all she had was Vision, and she ended up losing him. What’s even more heartbreaking is that she had to destroy the Mind Stone to ensure Thanos couldn’t get to it. But because he already had the Time Stone, he went back and took it himself. She had to do the one thing that would break her to save trillions just for it to be for nothing.

Because Vision wasn’t killed by the “blip”(what they called the time half the universe was killed), Wanda couldn’t get him back, so during the series WandaVision, she took that trauma and created her own reality where she had Vision and her two sons. Yes, that included mind-controlling the entire town of Westview, and it did kind of make her a villain because she chose to keep it going. But, however, that is what happens when someone is visibly in pain and no one helps them. It was very heartbreaking to see that her whole world was torn down in the end and she had just gotten the one thing she wanted- a life and family with Vision.

When I first watched the series, I felt it was a slow upbringing, but it was a good character upbringing and it showed a new side of Wanda, almost like she’s going through a psychic break. This can be applied to someone in real life, if they have been through so much trauma and have not had help from friends or family, this is what happens. They go through a break, and people get hurt. But people wanted to blame it all on Wanda, and personally, I strongly believe that is very unfair.

Wanda did not deserve the trauma and pain she’s been through and that she deserved so much better.

Thank you for listening to this week’s rant, next is Loki. Stay tuned:)