Hello! So, blog ideas have been coming to me very slowly. Today I’m writing about one of my favorite Steven Universe characters, Blue Diamond. Now, for anyone who has seen the show I know she isn’t the best character, but I enjoy her concept and design along with her story. First, I’m going to talk about the show a bit for anyone who is unfamiliar. 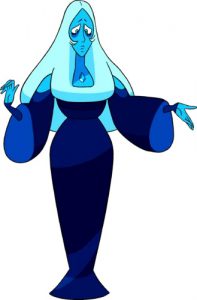 Steven Universe is a show that follows a boy, Steven, on his adventures with the crystal gems. All the gems in this show are based off real crystals, and I find that very interesting especially seeing the character designs. The crystal gems are a group with Amethyst, Pearl, and Garnet. They were a part of a rebellion against home world with Rose Quarts leading it. Steven is Rose’s son. She did die unfortunately after shattering pink diamond, the leader of home world at the time. Home world is now mostly led by yellow and blue diamond. Eventually, the crystal gems grow adding Peridot and Lapis Lazuli. These two gems are from home world and must learn how the world works and how to live there. They live in a small town of Beach city, Delmarva. The gems live in an ancient beachside temple. The story follows Steven trying to learn the powers of his mother, as he inherited his mother’s gem. He’s a half-human half-gem.

Now, lets talk about Blue Diamond. She is a home world gem and a member of the Great Diamond Authority, who formerly ruled the gem race. The diamonds are very large characters in appearance. Blue specifically looks smaller due to her hunch and large cloak. She acts as an enforcer and arbiter of Gem society. She has a reputation for mercy and forgiveness. After Rose Quarts shattered pink diamond blue fell into a prolonged state of grief and depression Unable to let go of the past, Blue becomes fixated on preserving Pink Diamonds legacy. Blue is unable to understand humans as well. She was shocked when Greg, Steven’s dad, was able to comprehend and sympathize her pain of loosing a loved one.

Not much was revealed about Blue diamonds past. Over the course of thousands of years, she amassed a great amount of respect, colonies, and Gems. Her tole in the Great Diamond Authority was one of diplomacy, she enforced White Diamonds rules on home world. When pink diamond was created all of the diamonds grew a close relationship with her. When pink was locked in a tower as punishment, Blue would come to reprimand her for her wrongdoing. Pink diamond created a human zoo when home world was planning to take over earth. Blue kept the legacy of this zoo after pink was shattered. 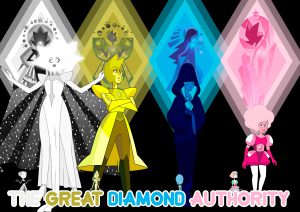