In all honesty, he sucked. I hate this version of the joker and how they try to play him as like a mob boss cartel style thing. Joker was never like that really. Even down to the design I can’t stand this reenactment. The grills, the fit, the hair, and the tattoos just don’t give Joker. Along with this joker I also cannot stand the Harley Quinn. I love Margot Robbie and she fits the role it’s just the design and everything. I think Jared Leto could’ve played the joker 100%. Who ever was over the design is who messed it up mostly.

I love this version and I love the show. They just made him a little different but unlike Jared Leto’s he is likeable. I don’t have too much to say about him, but I think it was well done by Cameron Monaghan and design wasn’t bad either.

I love love love this version. The only reason he isn’t higher up is because he isn’t a classic. He is new. I think Joaquin was the best actor they could’ve been casted for this. He played it out so well and the dedication he went through on set was crazy. I love the design they really brought it back to the classic Batman animated series type of suit. It isn’t your usually joker makeup, but I still really enjoyed that difference in it. 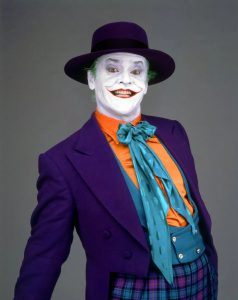 I just love Jack Nicholson to be honest. The way he played Joker was more of the funny clown type of style. Back to the comics and original styles and I love that. When a show or movie is made the more, they base it to the comic’s accuracy the more ill love it.

#1 Heath Ledger in The Dark Knight

My all time favorite. Every popular quote from the joker came from this movie. Heath Ledger did a 10/10 job. Down to the costume, makeup, acting it was all so well done. It lured to more of the side of joker that wants power and that is obsessed with the Batman, and I love that because that’s what makes Joker. I also want to mention how dedicated Heath Ledger was during his time on set. This role messed up many actors mental and physical health, but they performed through it and deserve recognition. RIP to Heath Ledger.