This week’s blog I totally forgot about. So, last minute, I have to present to you my favorite Five Nights at Freddy’s games. I’m going to do my top 5 from least to most favorited.

In FNAF Security Breach you play as a small child, Gregory. You team up with Freddy to escape the pizzeria without being caught by security, Vanessa. In this game it features the Glamrock animatronics. I don’t hate the physical design of them, but I feel they are missing something. Everyone is mad about the replacement for two previous animatronics, Bonnie and Foxy. I know Roxy was supposed to be like Foxy, but she is not like Foxy. At all. I hate her. Case closed. Anyway, I am more upset about Bonnie being gone because that rabbit is an icon. He deserves to be there frfr. There are theories as to why he isn’t there. He was replaced by a big alligator names Monty :/. I like this game it isn’t hated, but there are small things I would personally change. 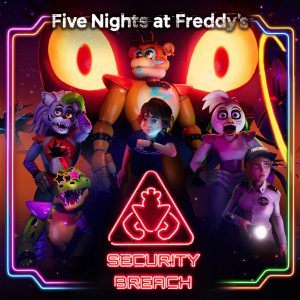 This is the very first OG game, FNAF 1. In FNAF 1 you are a night watch security guard. The entire game resides in a small security office with two doors and a set of cameras. You watch the cameras for the four animatronics who are trying to kill you. When they approach the doors, you shut them. You have to be careful though, because your power supply will run out and shut down. When that happens, it turns to a dark screen, and Freddy lights up to sing you a lullaby before he kills you. I absolutely love this game. I only put it at #4 because it isn’t my favorite. I don’t have anything bad to say the game itself is a basic first game with the four original characters. Freddy, Bonnie, Foxy, and Chica. 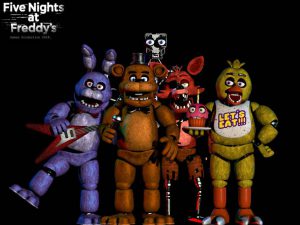 In FNAF pizzeria simulator you start by investing into your own pizza place. This game has an entirely different concept of the original gameplay. You run your own pizzeria and you have to keep it a safe and healthy environment. Failing to do so can result in being sued or blacklisted. That isn’t the true gameplay though. After the pizzeria closes you have a long list of tasks to do on a computer. Beside you in the office are two vents. Also, on the computer is a ventilation system with motion tracking, a way to turn off your air conditioning, and your tasks of course. You can send fake noises through the vents to lure your animatronics away. Now, how did you get those animatronics? Every night you get a broken down animatronic from the ally of your pizzeria. You can choose to salvage it or throw it out. If you salvage it, you have to survive the check list then you get to keep it. If you keep it the animatronic enters your pizzeria. I spent most of this description describing the game because I love this game. I’ve spent many hours playing it. 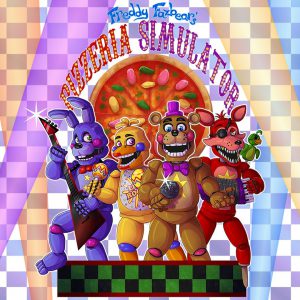 Unlike the other games this one takes place in a child’s bedroom. You play as Afton’s middle child, Evan. Afton conditioned Evan to be terrified of the animatronics to try and avoid Evan being killed by them. Afton would send his broken animatronics late at night to scare Evan. They would be in his halls coming towards his doors and Foxy would be in his closet. There is more lore to this specific game but that is the basics. I have nothing bad to say about this game it is one of my main favorites. 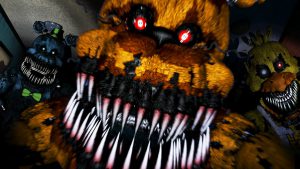 This game is definitely my favorite so I’m going to give you the full extent of the plot. This game follows the closing of a Freddy Fazbear’s Pizzeria location. William Afton decides to move away from the Fazbear Entertainment and start his own line of children’s entertainment. He then founded Afton Robotics Inc. and created the Funtime animatronics. In reality, these animatronics were kidnapping machines. They were solely created for Afton’s desire to murder children. Eventually in this game one of the animatronics would kill Afton’s youngest daughter, Elizabeth. He called his place Circus Baby’s Pizza World. The main animatronic he created was Circus Baby, along with Funtime Freddy, Ballora, Funtime Foxy, Ennard, Funtime Lolbit, and some smaller animatronics (Bon-Bon, BidyBab, Yenndo). In the game you are Michael Afton, Williams oldest son. You seek to find out what’s going on behind these pizzerias. As you venture through the game Circus Baby exposes to Michael her secrets before she kills him in the end. 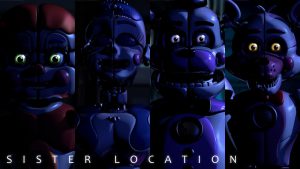