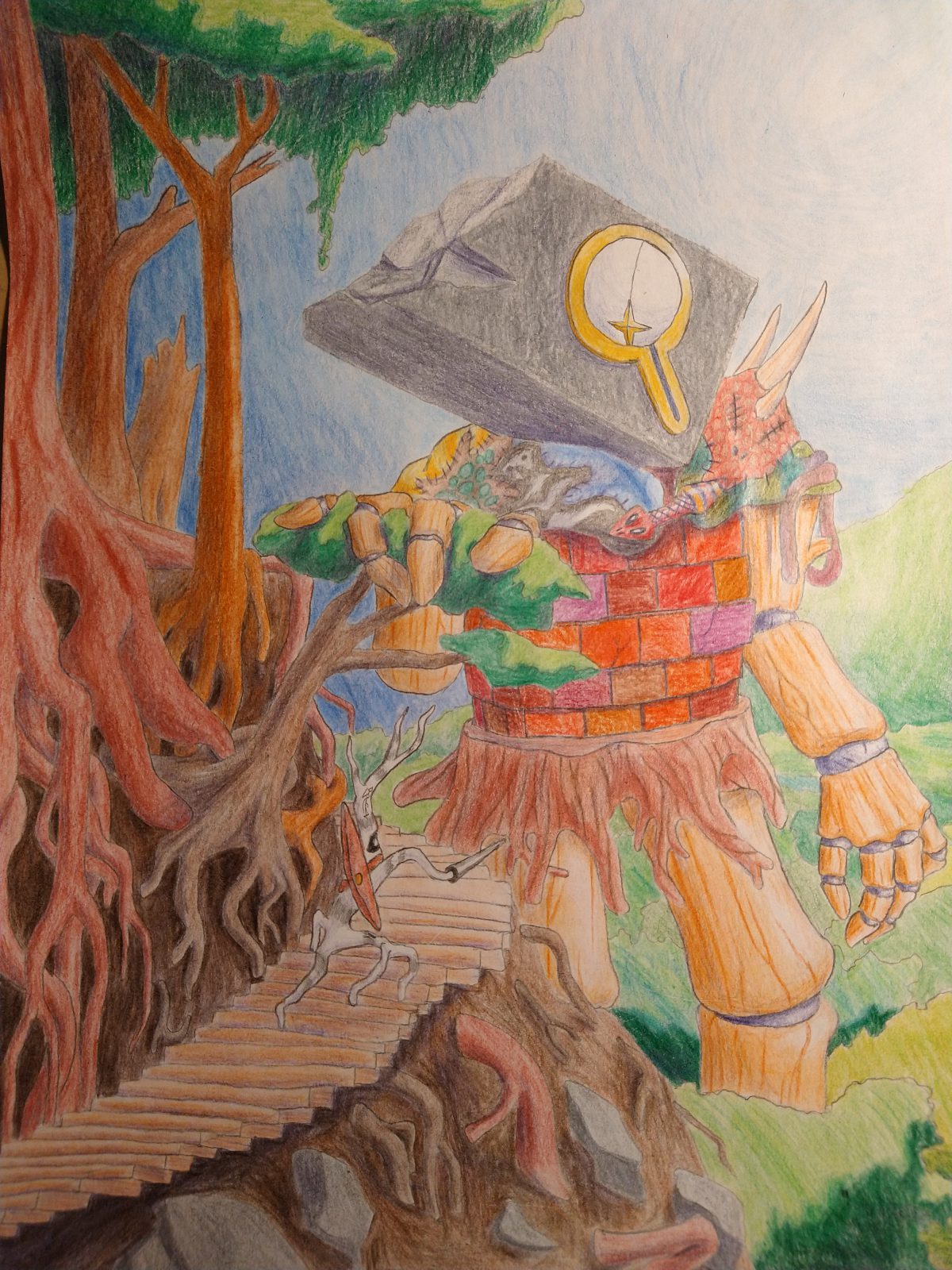 “Well, the Lilarianads that found me named me Lopside, after the asymmetric quality of my head. But I don’t believe I was given a title at my creation, neither do I think it matters all that much.”

“… I have always found Sam to be an appealing name.”

“I cannot say for certain, as my memories are often fleeting from those youthful times when I was composed. But disregarding the few memories I can recall, I have hypothesized that I am a sibling of the three gods. My head seems to be forged from the deep core, as the others are. It also resembles a piece of the pillars which they wield, broken of course. So I surmise that perhaps my maker created me by accident in one way or another, and casted me away. So I suppose that I am a bastard god of sorts.

“I made it myself, and It was a particularly difficult ordeal. At the dawn of my life I was unable to do much of anything but sink into the dirt like a common monolith, as of course I was nothing but my head. Thankfully, after some time I discovered a small shred of godly power remained within me. So, through sheer force of resolve I influenced the surrounding flora and fauna to do my will. Through that I was able to fashion this marionette you see before you.”

“Its impossible for me to pin precisely how long, as for most of the time I had no way of telling it…  When did the Lilarianads first set foot on this planet? 5713-ish? It was well prior to that, but their arrival was the earliest and most memorable event I could think of.”

“Ah, yes. It was an act of desperation for company. You see, when I first encountered the Lalarianads they feared me terribly, and i was as horribly lonely as I am now. So I believed if I wore clothing just as they did I would seem more approachable. I came up with the idea of making an extravagant cape of animal hides. I never hunted the animals myself, but I took them from corpses rather than letting them decay and go to waist. Of course this ended up making them even more terrified of me, as they believed I had slain the creatures myself. though it still hampers my search for comradery I still keep it in memoriam to the animals that now compose it.”

“I-…  I have. By someone dressed in a blue and red cloak a good long while ago. They looked quite similar to you. They did not posses the insignia on your shoulder, were a bit larger,  and far, FAR ruder than you. N- not that you’ve been rude to me at all. In fact, you have been the most pleasant company I’ve had in some time. You need not tell me about it again, for they made sure I would never forget from their scathing fervor. Something of my existence being an affront to this “Maw”, and that which was born from the bowls of Maw will return to its bowls Please, ask another question.”

“Hmm…  it was likely the first time I had met a Birlev. I was rounding the corner of a cliff when I noticed a young Birlev explorer hiking upon it. It noticed me too- well, how could it not? I was unable to understand its chatter, but they took a keen interest in me. Even though I payed them little mind they followed me for several days. Every time I would laydown for the night I could see them in the distance making a camp fire not far away. On one of those nights my curiosity boiled over and I approached them, and sat down next to them. They didn’t run, or scream, or… anything like that. They sat there content as ever to my presence.  With one finger I began drawing pictures on the ground in an attempt to commune with it. In response it drew steller maps and pictures of its kind facing monsters Id never seen before. We did this until the sun returned, and they headed off into the direction of a Lilarianad village. Where I am not able to follow. After that I never saw them again.