Though, many of the men in the rap industry aren’t comfortable enough to accept Lil Nas X’s sexuality, he shows us time and time again that he doesn’t care and he’s a prominent figure in rap. I personally think that people often get too caught up in his sexuality rather than paying attention to his artistry. His pen work and usage of different instruments is something that surpasses all the hate that he receives.  Welcome to Montero, here I will be analyzing some of my favorite songs from artist’s Lil Nas X new project. After all the hype around this album, I really want to get down to the root of these songs and why they are so controversial. 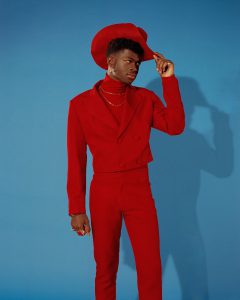 Firstly, I want to bring attention to the amazing horns in this song. Supposedly, Lil Nas created all musical instrumentals on this album. It is not a frequent thing to see rap artist make their own instrumentals, and I would just like to show  my appreciation for his multitalented skills. What really grabs the attention of his audiences is his usage of bass. The beat is nice enough but the bass adds that extra flavor to the song. It gets your head moving and quickly becomes one of your favorite songs from this artists.

Let’s talk about this amazing feature with Jack Harlow. He is another rap artist that has recently blown up over the summer of 2020. His flow and voice is unique and he brings so much artistry to the rap industry. This collaboration was so unexpected for me, but it worked so well. The way Harlow always has a way to ride the beat for ANY song is so admirable. I would love to hear more songs from these two because they are so complementary.

THATS WHAT I WANT

This song is my favorite from Montero. It really takes us back to Lil Nas’s country roots. If you’re unfamiliar with what I’m referring to, Lil Nas dropped the first ever trap country song titled Old Town Road featuring the country godfather himself, Billy Ray Cyrus. This was the song that really put him on the map, gaining attention from artists all across the world. There has been so many remixes of this song even a version featuring my favorite boy band BTS. But enough about the past, let’s get into this amazing track.

What stood out to me the most was the bridge. It was so catchy when I first heard it and it is the perfect lead way into the hook. One of the things that are most prominent in the track is the vocals it really complements the instrumental really well. As a country music hater, this really changed my mind about the genre. It has heavy country undertones but what is most prominent is the alternative and trap tones of the song. It really appeases to all audiences and I think he really hit the mark with this one.

Also Billy Porter is in the video!!!!

Once again he brings in the horns!! I don’t know what it is about his incorporations of different instruments, but it really does something for me. Maybe that’s just the band kid in me talking, but I really love that so much.

This is a really cocky song, and what’s an album without a bragging song?! It’s about cutting loses with someone and having the confidence to talk about it. He lists his accomplishments in the album all while celebrating his independency. He also let’s us know that he can see through the façade that people put up after his claim to fame. This song is definitely a 9/10. The softness of the bass helps to bring attention to the lyrics, and they are so relatable. I suggest listening to this song whenever you see an ex, ex-bestfriend, or anyone who ever doubted your success. This song is definitely the confidence boost you didn’t know you needed.

I know I’ve said this a lot, but this is my favorite song from the album <3.  This feature was one of the reasons I was so excited for this album to be released. I feel like these two were a cultural reset we didn’t know we needed. I love to see grossing artists collab with each other to make an amazing song and they really exceeded any expectations I had for this song.

Doja Cat is an icon when it comes to music and fashion. She really has made her way into the music industry and has become a household name for all. What I fear the most when big artists like Doja Cat collab with up and coming artists like Lil Nas, is over-shadowing. I see too frequently where one artists out raps or out sings the original artists on the track taking away from that artist’s work. This song was a perfect balance of both of their voices. You got to hear Doja Cat’s personality and pen work while also appreciating Lil Nas X’s. This is yet another complementary duo that I am excited to hear more from.

From his features, to his solo tracks, Lil Nas X has shown us yet again why he is an artist to look out for. His consistency in lyricism and musical production is what makes him such a valuable and unique artist and I believe it needs to be appreciated more. The way he pays attention and provide us with so much creativity and detail really shines through his work. I encourage you to set aside all the press and criticism and listen to this album with open ears and an open mind.

One thought on “Rap Corner ~ MONTERO”