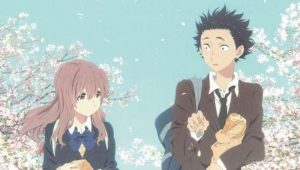 A Silent Voice is a movie written by Reiko Yoshida and directed by Naoko Yamada about a young girl by the name of Shouko Nishimiya who was relentlessly bullied in school by a young boy, Shoya Ishida. Years later, Shoya meets Shouko again. He desperately wants to make amends after spending years of not being able to look at people and feeling as if those around him were judging him relentlessly. The movie beautifully portrays the determination of shaping trust and building friendship despite the struggles and obstacles that may come about through that journey.

The plot line is a very intense one, throwing many fans through loops and an emotional roller coaster that no one honestly expected. They utilize the typical “mean girl” stereotype that are usually in the stories like these. There are characters they make you learn to hate by their voices alone. For examples, a character by the name of Naoka Ueno threatened Shouko continuously for hanging out with Shoya causing Shouko to be too scared to talk to him. Shoya, the typical bully who has found some type of solace, makes the audience emotionally confused because of the fact that they don’t know whether to hate him for the terrible things he did to Shouko, or forgive him because he is trying to make up for what he’d done.

Shouko, though the typical innocent girl, came with many surprises along the way. With Shouko being deaf, she cannot speak that well. However, in many of the more intensely emotional parts, she uses her voice to talk to Shoya and express how she feels. Hearing her struggling with her words and emotions makes the movie very hard to watch without shedding some tears. She even goes as far as attempting to end her life because she feels that her disability is a weakness and a hindrance to everyone’s life around her.

I think of this movie as a PSA, as well. It really portrays the struggle of someone with a disability and it’s sad to say that a lot of things that happened in the movie could definitely be something that happens in reality. People with physical disabilities are often discriminated against more than one would think. Countless times, people have been mocked for the way they talk and their mannerisms all because they are different. Shoya was cruel to Shouko when they were younger when all Shouko wanted was to be friends with him. The theme behind the movie is practically ‘do unto others as you would want them to do unto you’ or even ‘respect those who are different from you’. The movies shows that karma will come back to you when you are cruel to people and you can either run from fixing that situation, or you can pay the price and make the amends that you should.

Overall, the movie was beautiful. The animation and art captures the audience in the way a fantasy would. The audience are always immersed and it is a movie that will have you at the edge of your seat.