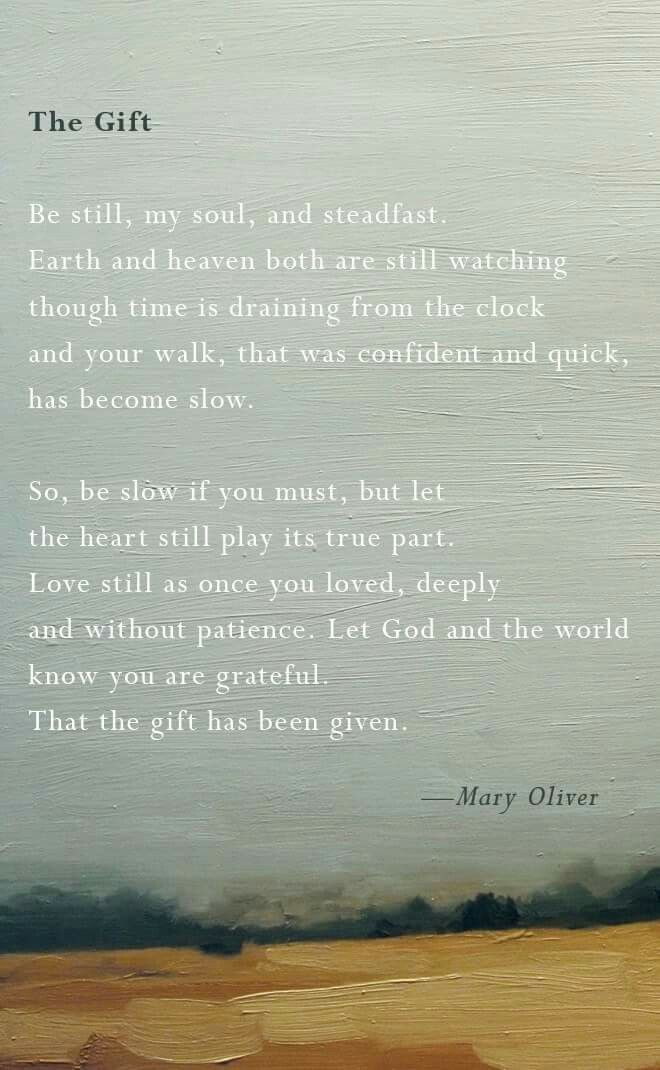 About a year and a half ago, I was gifted with a basket filled with all the things I would need for art school by an alumn (and dear friend). In that  basket there were coasters, cups, a towel, and many other dorm living neccessities. Although I loved every single thing in that basket, one thing in particular caught my eye… Mary Oliver’s collected works “Devotions”.

I immediately began to read the book when I got it, and quickly fell in love with the style that Mary Oliver wrote in. I admired the way that Oliver wrote about the world, and I wanted my writing voice to be similar to hers. There was one poem in particular that I had a deep emotional connection with. That poem was “The Gift”.

In this poem, Oliver conveyed the beautiful complexity of the human experience, and what happens to the soul towards the end of our allotted times in this tangible realm. Reading that for the first time was absolutely mind boggling as a teenager whose thoughts rarely ever went to the depths that someone like Mary Oliver’s did.

One thing about Oliver’s writing that I always will admire is her ability to draw connections between her own writing and religious references. Many of Oliver’s poems use phrases from religious text and speaking, but it’s never over bearing.

In “The Gift” Oliver uses phrases such as “Earth and heaven are both still watching”.  This sentence gives the readers such a clear image of what she was trying to portray. I, as a reader imagined the subject of the poem on a big stage under bright lights, almost like a big finale show.

My favorite part of this poem is the direction that the second stanza goes into. In the second part of the poem, Mary Oliver speaks about not letting your love and gratitude fade as years go on. I think that this is such a testament to what Oliver represents in many of her written works. She is all about finding the love within the life you lead and keeping it strong even as years go by.

I think that is why I became so attached to her works in the first place. Many of her works represent my biggest goals in life, especially this piece. As a human, one of the things I want to accomplish in life is keeping the same passion throughout my years. Mary Oliver explains this so beautifully in her poetry. I hope to one day be able to express similar things as wonderfully as she does.

One thought on ““The Gift” by Mary Oliver”