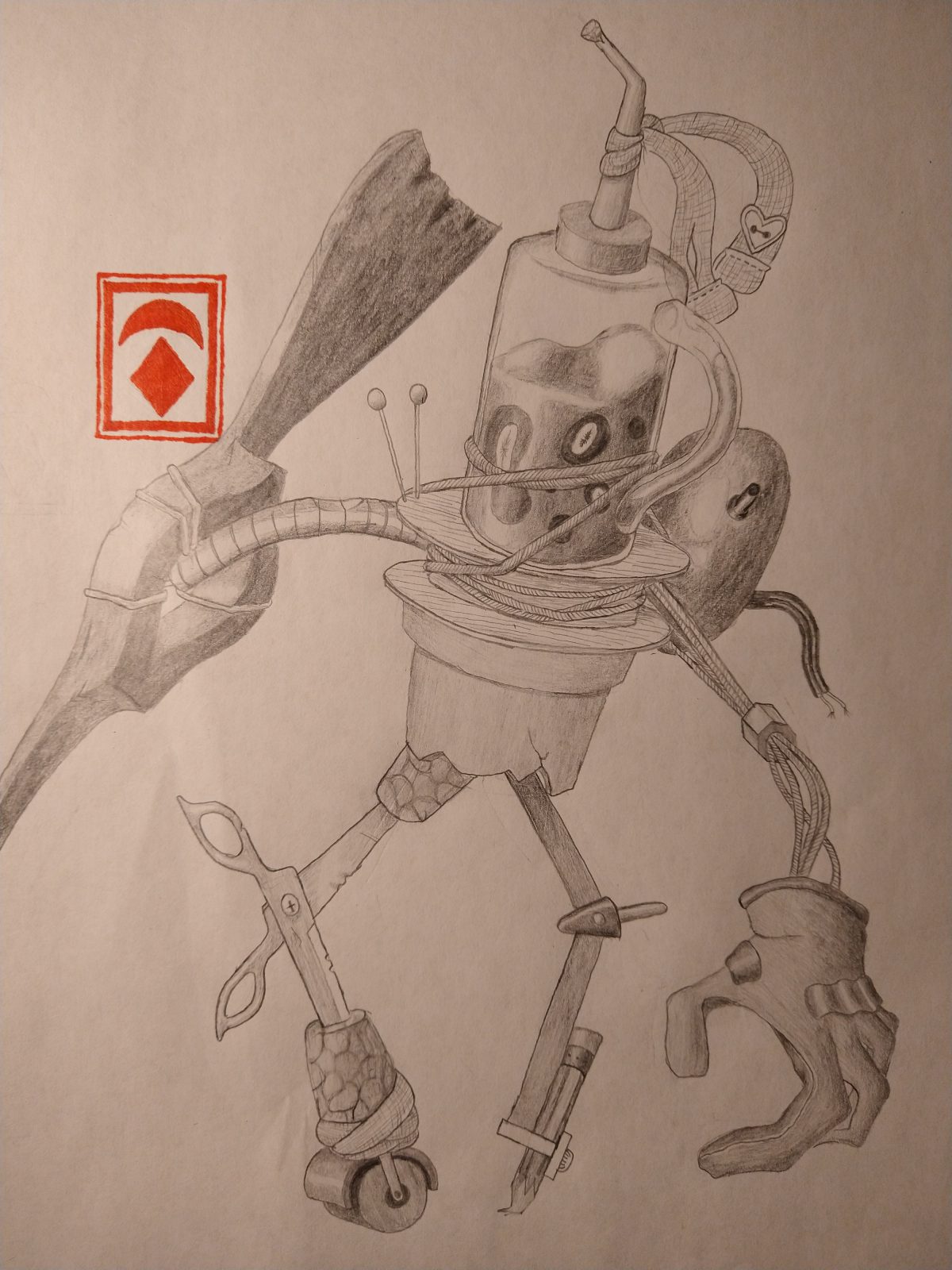 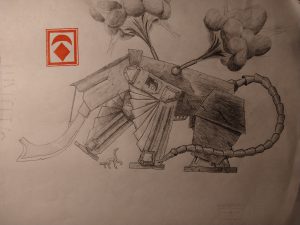 On our way to the rally point at Flux I and my guide passed through the capital city of Tookar, which was extraordinarily grand. Statues of imposing Lilarianad kings, generals, and artists alike stood immortalized by way of stone pillars carved in their likeness. Though, there was one that caught my eye more so than the others, not because it was any grander than the other carvings that surrounded it, but rather the opposite. The thing had a stature of only two feet high, if even that, and seemed to be composed of knickknacks loosely strewn together with twine and wire. I laughed, as it seemed comical that such a thing would brush elbows with prominent figures of Vinkitoo culture, but I quickly held my tongue when my guide told me the importance of its presence.

In 6002, after the loss of the Great Tunnel War many Lilarianad empires were struck by heavy tariffs and burdened with war reparation’s, which lead to strife throughout. This in tern, lead to countries desperate consolidation of power, and crueler treatment of lower social classes. In particular, the surfs and pioneers which were sent to settle recently conquered lands. It was not uncommon for a noble to order the seizure of children from whole villages to be sent to labor, most never to return. Though, these peasants were not alone in their suffering. Native Lilarianads, as well as a race of people aptly named the Jar Heads were unwillingly subjugated as well.

This is were that little creature, whos name was Mittnic, came into the fray. They were a Jar Head forced to work in the mines off the coast of Tookar, extremely hazardous work, in which the life expectancy were little more than days. This was not helped by how their oppressor’s were able to control the Jar Heads. You see, Jar Heads reproduce by some form of mitosis. They pour a piece of themselves into a separate container, and a small section of the parents memories leave them and go into their child. So in order to keep the Jar Heads dumb and subservient all that needed to be done was spread the memories of the parents so far and so thin between generations that it practically did not exist. Now the massive, and stupid labor force needed supervision and direction. This was the job of seized children.

As to why they used children rather than adults, I hypothesize it was because they believed adults were more capable of coordinating a rebellion against them, but I digress.

One of these children took care of Mittnic well, and they became great friends. Her name and identity is not known, only that the child was of great courage and intelligence. She composed Mittnic’s body, and even hid them away so that Mittnic would not be forced to have children, and not lose their memory. She even taught Mittnic of the world far beyond the mines, and the greater importance of life. These great deeds unfortunately, would not be met with equal kindness, As she would in the year of 6005 die from a beating by her supervisors. Not because she was discovered taking care of Mittnic, but rather because she was overwhelmed by malnutrition and to weak to work.

This Mittnic would not forget.

Pushed by grief, sorrow, and scorn Mittnic devised a plan to avenge the loss of their dear friend, and strike at those who slew her. Mittnic had many children in secret, and raised them to be an army. while Mittnic’s memory gradually grew dull, even to the point of forgetting their friends name they did not forget the love they felt for her. This was a sentiment that all of Mittnic’s children shared, as thought they never knew the girl, they could see through memory that she was truly a kind soul.  Everyday Mittnic and their children would steal away a pieces of metal from the mines, and underground, away from sight, forge a monster. Little by little Mittnic’s masterwork came to fruition, and on the eve of 6010 the Besmalk Behemoth, piloted by Mittnic and their children, erupted from the ground and reined hellish wrath upon all whom apposed it. Soon, surfs and peasants who had grown rebellious by their sorry treatment joined the Behemoth in its rampage.

Though the Behemoth was eventually destroyed, and Mittnic killed, this was the spark that lit a fire of which set off the mother of all powder kegs. This was the quintessential event that united the people of Vinkitoo and then began the Besmalk route, but that is likely a story all to its own.

I have drawn a depiction of both Mittnic, and their behemoth with a Lilarian next to it for scale. Tales from the Shell Clergy have painted a grim picture of these wild unknown worlds, that everything here is somewhat encompassed in savage disorder, and perhaps they are right. But this has taught me that there may be some semblance of purpose in it all. Through all the tales of pride, glory, and fervor these other statues tell-this one is of more humble and intimate roots, which I now have a silent respect for.

Regardless, these drawings should be brought back to the church, this is certainly not something to be forgotten.