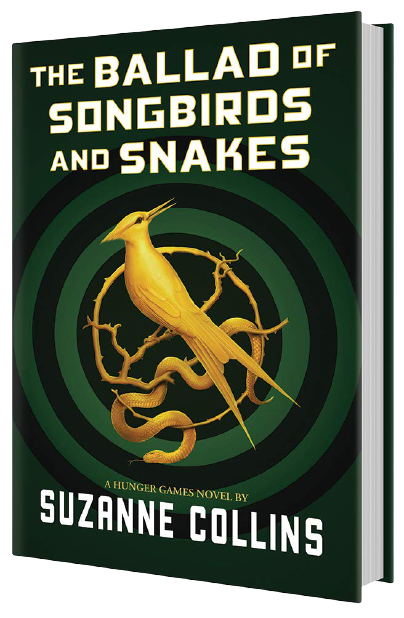 Ah, The Ballad of Songbirds of Snakes. This book got me through my hospital stay and refueled my fleeting love for The Hunger Games series. I bought the book right when it released, but only got around to reading it this month. I was a little wary to read a novel where the protagonist was 18-year-old Coriolanus Snow, of all people, but I fairly enjoyed it!

P.S.: If you’re reading this review, I’m going to assume you’re already familiar with the Hunger Games series, so I won’t be explaining the events of the previous books or avoiding spoilers from them. You have been warned!

The book takes place sixty-four years before the events of the first Hunger Games novel, but it still very much so takes place in the future. In this book, we’re reminded just how far ahead Panem is. Even so far into the past, we’re still greeted with wonderful science-fiction elements as we were in the original trilogy and a glimpse of the ruins of what used to be North America.

In short, the book tells the story of the 10th annual Hunger Games and Coriolanus’s involvement in them. This was the first time mentors were introduced, and they happened to be the graduating class of the Academy, which is essentially high school for the Capitol. We get introduced to how several aspects of the games were introduced, and most were proposed by Coriolanus himself. Even some the songs of the series were written and performed by another main character, Lucy Gray Baird.

Speaking of Lucy Gray, the two have a budding romance, and hearing the thoughts of Coriolanus, it can’t help but make you feel uncomfortable. From the very beginning, you can tell something is off in the wording of his thoughts, and it isn’t until later on when it sets in that something just isn’t right. However, the wholesomeness of young love really does shadow over it in the beginning, and I couldn’t help but wish the best for the two while ignoring the red flags.

I definitely wouldn’t be the first person to write that I found Coriolanus’s character FASCINATING. He’s written as the protagonist, and at first you can’t help but root for him. Sure, he starts out with little moments here and there that make you question his character, but it’s just a result of his upbringing, right? That’s the way you think throughout the book, and while I can’t say much here, watching his character devolve was exciting and heartbreaking at the same time. While reading, you forget what President Snow did and how he was in the original trilogy, which makes you forget that this is supposed to be a villain origin story. His character is complex and captivating, and I couldn’t help but hope that somehow everything would end up okay.

Lucy Gray was by far my favorite character in this story, however. She was the tribute assigned to Coriolanus and instantly captivated both the audience in universe and and out. She was a member of the Covey and resided in District 12- The same district Katniss Everdeen would eventually be a citizen of. She serves as one of the biggest connectors to the culture of the Districts.

Overall, I loved the commentary that came with Snow’s character mentioned above and the lovely writing and imagery in the book. The callbacks to the original trilogy were wonderful bonuses, and the characters were all super engaging and fun to read about. I also ADORED the main antagonist, Dr. Gaul. However, my biggest gripes with the story has to be the pacing. It’s EXTREMELY slow at the beginning, and sometimes it just feels as if events are being thrown in to make the story more entertaining before the Hunger Games. That would have been more okay if the pacing of the story didn’t kick off and go a million miles an hour at the third part. It just felt very underwhelming, but it definitely make you think while reading, which is a great aspect to have in your writing.

I give The Ballad of Songbirds and Snakes 3/5 stars.

One thought on “The Ballad of Songbirds and Snakes: A Spoiler-Free Review”