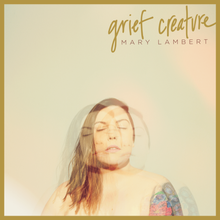 For this month’s review, I will be rating songs from Mary Lambert’s self-produced album, Grief Creature (2019).  This album is filled with some weepy wonders, and as a sad song enthusiast, I couldn’t have been more excited when this album released.  Lambert describes it as her “life’s work, masterpiece, a break-up album to shame, an ode to mental illness, and a love letter to hope”.

This song is short but powerful. The soft piano paired with Lambert’s vocals is heaven. It’s not my favorite, in terms of songs, but the lyricism and instrumentality in this song is so beautiful, and it makes for a great intro for this album.

“I thought s**t, she looks happy
for a girl who is drowning”

This is one of my favorites from this album. It’s the break-up song to shame that Lambert describes, and it’s one of the best songs on the album, in my opinion. It’s a song that you listen to, and it’s sad, but it’s also incredibly empowering. There’s that dramatic, weepy melody, but those strong, uplifting lyrics, and it’s a song that just makes you feel like you are worthy despite the shame, despite everything.

This is the first of the few spoken-word songs on this album. It’s Lambert’s poem, “The Art of Shame,” read by her and accompanied by her masterful pianism. It’s so powerful, and it’s one of those pieces that live rent-free in my brain.

“I took snapshots with my memory camera”

I love this song purely for the vocals. Lambert really popped off with her runs in this song, and if you had asked me when this album was first released, I would’ve said this song was my favorite, 10/10, but I think I got burnt out on it. I mean, I listened to this song every day, on repeat for at least 2 months, so it still has a high regard in my book. However, it’s just not that 10 it used to be, and I’m a little bummed it’s not because of how much I used to love it.

This is the one upbeat song on this album, and it still talks about sadness, but I’m not mad at it. Lambert’s entire brand is built on writing and producing sad songs, so when she set out to make a sad, tear-filled album, I was a little surprised to even see this gem on the tracklist. Nonetheless, it’s about being sad and this noting o of being “born sad,” so it’s still very much on brand. It’s not my favorite song because it strays from Lambert’s melodious piano and orchestral sound, but it’s still a great song.

This is another one of my faves. It’s very much a love song, and I am so here for it. Also, the vocals in this song are so good. Lambert, at one point, has some layered vocals, and it’s one of my favorite parts of the song. Overall, I love this song, but it’s not quite a 10. However, it is pretty close!

This song is great. It’s not one of my favorites, necessarily, but I still really enjoy it. Lambert has such a soft, profound voice that it makes it nearly impossible to dislike any of her music.

“Do you know how to hold my heart
like a safe and a holy relic?”

This song is one that really tugs on your heartstrings. It’s one of those sad songs that makes you want to cry no matter how you were feeling before listening to it. The repetition of “Am I easy to leave?” is what gets me everytime. Also, the pairing of Lambert and Manser’s vocals is phenomenal and just a great choice artistically.

Am I easy to leave?”

This is the second spoken-word song on the album, and it’s next in line to my favorite song on this album. The poem is so incredibly powerful and moving. The emotion in this song can be felt so strongly, and it’s convicting. Then, towards the end of the song, Lambert strikes again with her poignant vocal stylings, and you can’t really help but melt. It’s just that type of song.

This song isn’t as upbeat as “Born Sad,” but it still isn’t Lambert’s usual sound, making it one of my personal favorites. To be fair, most of the songs on this album, I consider a favorite of mine, but I quite enjoy the pop type sound coupled with Lambert’s moving lyrics. Macklemore’s verse in this song added to the pop sound of this song, but I think that’s what really made this song work.

“My brain is a house divided,
rooms with too many doors”

This song is so honest and vulnerable. I think that we’ve all been in this place where we’re just sort of stagnant, not moving forward, but we want to progress. That’s what this song is, it’s a poetic “f- you” to that feeling because it’s about overcoming that feeling, and forgiving yourself. It’s a song about choosing yourself, and it’s a song that never fails to resonate with me because I do still believe in hope.

The beat in this song is interesting. It’s a song you can kind of just vibe to; it’s nice. It’s got the same pop- y feel to it as “House of Mirrors,” but also, very different. It’s not one of my go-to songs, but I still enjoy listening to it. It’s an uplifting song that encourages you to keep going and stop staying stagnant, so I especially appreciate the motivation in this song.

“Sadness is hardly an artform, but it does get better”

This song is such a sensual song, and you can’t help but want to dance. The music just naturally sways your body, and it is just such a bop. This is the kind of song I play when I’ve had a long day, and I just want to feel— which is coincidentally what the song is titled. Hollis and Lambert really did the thing with this one.

“Find within all this space
that you need to be free”

This is a spoken-word piece, and it one of the most evocative pieces of music I have ever heard. The orchestral sound coupled with Lambert’s voice is so eloquent and passionate. I mean, I have never heard a violin played so beautifully. It’s like a literal slice of heaven, and then, you listen to the lyrics, and you just sort of feel gutted. Who does that?! Two words: Mary. Lambert. *mic drop*

“What if I told you trauma is a stalker?
Follows me room to room,
visits me at work,
leaves dead animals on my day planner,
texts me knives,
licks my memory before I have a chance to get it right”

This is my FAVORITE song on this album. I don’t think I will ever get tired of hearing this song, like I love it so much. It is so emotional and evocative. I am always moved after hearing this song, and I listen to it at least 25 times a week. It’s one of those songs you just can’t but fall in love with— from the care Lambert took to composing the chords and the piano to the lyricism. She is my favorite poet, and she brings her poetic style into her songwriting, and it is pure bliss.

“If you ever leave somebody,
pray to God you’re right, don’t leave in the night,
cry like you mean it, don’t cry like a coward,
don’t lie for hours, and say what it is”

This song is another spoken-word piece. Similar to “Knife,” it has some gorgeous vocals in it. The song is actually called “Sixteen,” but the poem she is reading is “Another Rape Poem,” which is actually one of my favorite poems by her. The pairing of these two pieces with the fervent piano playing in the background is kind of ingenius. Lambert just has a way with words and sound, and she knows how to manipulate these two mediums in a way that they blend seamlessly and beautifully.

“There were three wolves in the bedroom who circled me
without ever flashing their canines
Isn’t rape funny like that?
I have to speak in metaphor in order to get it out”

This last song is one of my go-to songs on the album. I just can’t get over how beautiful the piano sounds, and how soulful Lambert sounds while singing. This is also my favorite collaboration on this album, as well. Lambert and Baker make such a great duo, and I adore the layering of their voices in this song.

“You don’t belong here
Get out of my head”

Overall, Grief Creature is just that— a creature of grief. It’s a sad album filled with sad songs, but if you’re a sappy, sad song enthusiast (like me), then this is an album I HIGHLY suggest you listen to— bring tissues.