You are a goose. Cause as many problems as you possibly can.

This seems like a strange focus for a game, doesn’t it? The main character is a goose? Your only goal is to interrupt the peaceful lives of those who live in the town you are invading? This sounds like something that wouldn’t be very enjoyable to play, isn’t it? However, if you were to play this game, you would find that it is one of the most pleasurable games that are out there on the market today. 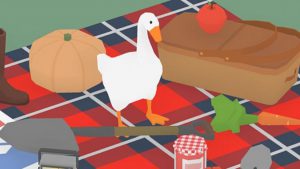 This is you. You are a goose.

This game was created by a small team of developers named House House that is based in Australia. They first worked on a game called “Push Me Pull You,” which was a minor success. With this success, they began tossing around ideas for a new game. In a group chat, one of the developers sent a picture of a goose, jokingly suggesting that they base the game off the goose. They began to toss ideas around, and a small beta game was created. What they did not expect, however, was the joy people received the game with. Because they lived in Australia, they did not realize how intimidating geese really can be, and how they can terrorize innocent people. Now that they knew how successful this could be, they began to flesh out the game, and it released in September earlier this year.

Upon opening the game, you are greeted with a peaceful title screen with piano music playing in the background; the score of the game is completely original and was composed by one of the developers in lieu of using free domain music.

You learn the basic mechanics of being a goose: ducking, running, flapping your wings, and, of course, honking. Once you learn the basics, you are ready to ruin the day of your first foe: the gardener. 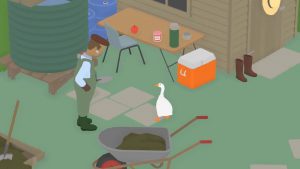 This is the gardener. He has a small garden. He does not like pesky geese.

The main gameplay consists of a list of simple tasks for you to complete and completing these tasks lets you see the hilarious outcome. There are multiple ways to carry out these tasks, and they all have different outcomes. For instance, one of your first tasks is to “get the gardener wet.” You can carry this tasks out in a multitude of ways: you can drag his tools in the lake, and he has to get into the lake to get them back, or you can wait for the gardener to lean down near the sprinkler and turn it on when he least expects it.

Eventually, your hijinks come to an end, and you move on to the next area, which is filled with more people whose lives you can ruin.

This is the shopkeeper. She really does not like geese; any time you get near her, she begins to bat at you with her broom. You have to be very stealthy to get past her. 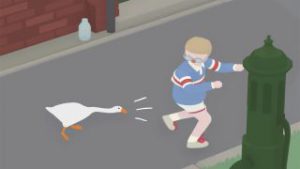 This is Boy. He is possibly my favorite character (behind the goose of course). He is terrified of geese- any time you get near him, he begins to run away, and you can chase him all over town, leading him in many different directions to carry out your tasks.

This game’s central mechanics are based on stealth and trial-and-error problem-solving. Many of the tasks can be carried out in different ways, yes, but there are some character quirks that can put a damper on your plans (i.e. the shopkeeper with her broom). Many tasks require you to sneak around and to do actions behind peoples’ backs. You can make the Boy buy his own plane, but you have to make sure that neither he nor the shopkeeper notices you taking the plane and setting it within her shop. If she notices, she’ll chase you off, and if he notices, he’ll take the airplane away from you. Which I find odd because most of the time he’s scared to even get near to you, but I digress.

To move on to the next stage of the game, you have to manage to lock the shopkeeper into the garage nearby, which makes her have to use the gate to let herself back into her small outlet shop. Your next destination is a small upscale neighborhood, where you get to mess with two uppity homeowners. 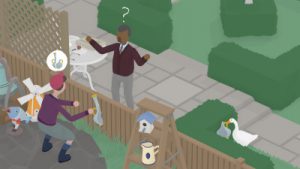 The neighbors seem to have a strained relationship, which is only made worse when you barrel in.

If you played the game continuously without looking up solutions, it could take you maybe four hours to completely finish the main portion of the game. This is one of the simple joys of Untitled Goose Game: it really isn’t a very long game, at least if you want to go through the main story. Of course, there are extra things after you complete the game, but I don’t want to ruin the experience for anyone who wants to play the game completely through. I believe that it has a lot of replay value as well since you can find multiple solutions to many of the tasks given to you. I haven’t completed the main game myself, but I have watched other people play it (if you can’t buy the main game, which is around $20 in Steam or on the Nintendo App Store, it’s just as pleasant an experience to watch others play it too) and I have found that there are many, many ways to be able to finish certain levels and tasks. Peace was never an option…

I won’t talk about the last few levels of the game, because I think that they’re what really make the game shine, but I will say that this game is probably one of the best games that I have seen this year. FNAF VR? Call of Duty: Modern Warfare? Sea of Thieves? None of them hold a candle to Untitled Goose Game. It is undoubtedly the closest thing to a perfect game that I have been able to find in the last few years. I can’t want to dive back in and cause more havoc on this small and unsuspecting town.

I used to be Caroline Nations. If this is who you're looking for, I'm sorry. I'm Kai now. Seventeen, young and sweet, MSA student, and I'm not throwing away my shot. View all posts by Caroline Nations