“An epic love story across time.” 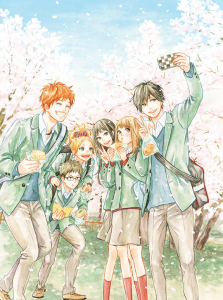 Over the years, there has been on-going excitement in the anime community. On March 13, 2012, a well written and illustrated manga – Orange – debuted in Japan by mangaka Takano Ichigo. The manga is illustrating the story of a group of friends, Naho, Azusa, Hagita, Suwa, and Takako, sending letters to themselves in the past – their junior year – in order to prevent the suicide of their short friend, Kakeru. When Naho, the main character, receives her letter, she takes it lightly. The letter entails what she should and shouldn’t do on that day. She disregards the letter as a prank and goes to school. However, she notices that everything the letter said would happen that school day, happened – including that Kakeru’s mom would commit suicide if he were to hang out with them after school. Naho begins to take the letters seriously and reads them. The letters give her a daily task to do in order to stop the future that had already occurred once. As the story goes on, Naho and her friends – who also received letters – fight to make Kakeru’s life bearable. They want to take his burdens off of his shoulders. All the while they help him, Naho’s love for Kakeru grows stronger by the day and vice versa. It becomes an emotional roller coaster for the audience, for they don’t know what will happen next or if Kakeru’s life could be on the line at any moment. It’s a balance between personal needs/wants and sacrifice to help friends.

The writing style is amazing and the art helps the reader become more invested in the story line. Instead of writing generic endings and conflict, Takano Ichigo allows the story to stray from the cliche situations as needed. It makes the reader become addicted to the story and want to know what comes next. The story fits under the “slice of life” genre of writing. It gives realistic situations somewhat unrealistic qualities and sends the audience on a journey of feeling as if we were actually in both Naho and Kakeru’s shoes. The manga does, however, deal with some very touchy topics that can be very difficult to write about. One topic is time travel. Science fiction is already a difficult topic to touch on. Although the genre wasn’t the main type of genre the author was trying to go for, the entire plot line evolved around it. They didn’t elaborate on the specifics of how the letter got to the past, which some were fairly disappointed in, but if the author were to elaborate, it would take away from the story. It also emphasizes the effects of depression and how those around a person suffering from poor mental health are affected. Mental health is taken fairly lightly in Asian countries, which is why Orange has become such an iconic manga. The only issue with the story was that the ending was very abrupt. It wasn’t satisfying. There were a lot of things said and planned in the story that seemed to guarantee and longer ending filled with what happened throughout the years. However, right after the climax, there wasn’t much of a falling action or a definite resolution. It was rushed and seemed to be thrown at the end almost as if the author didn’t know how to end it.

Despite such, the manga is a very good read and is very intriguing. It definitely paved the way to a different type of manga genre.