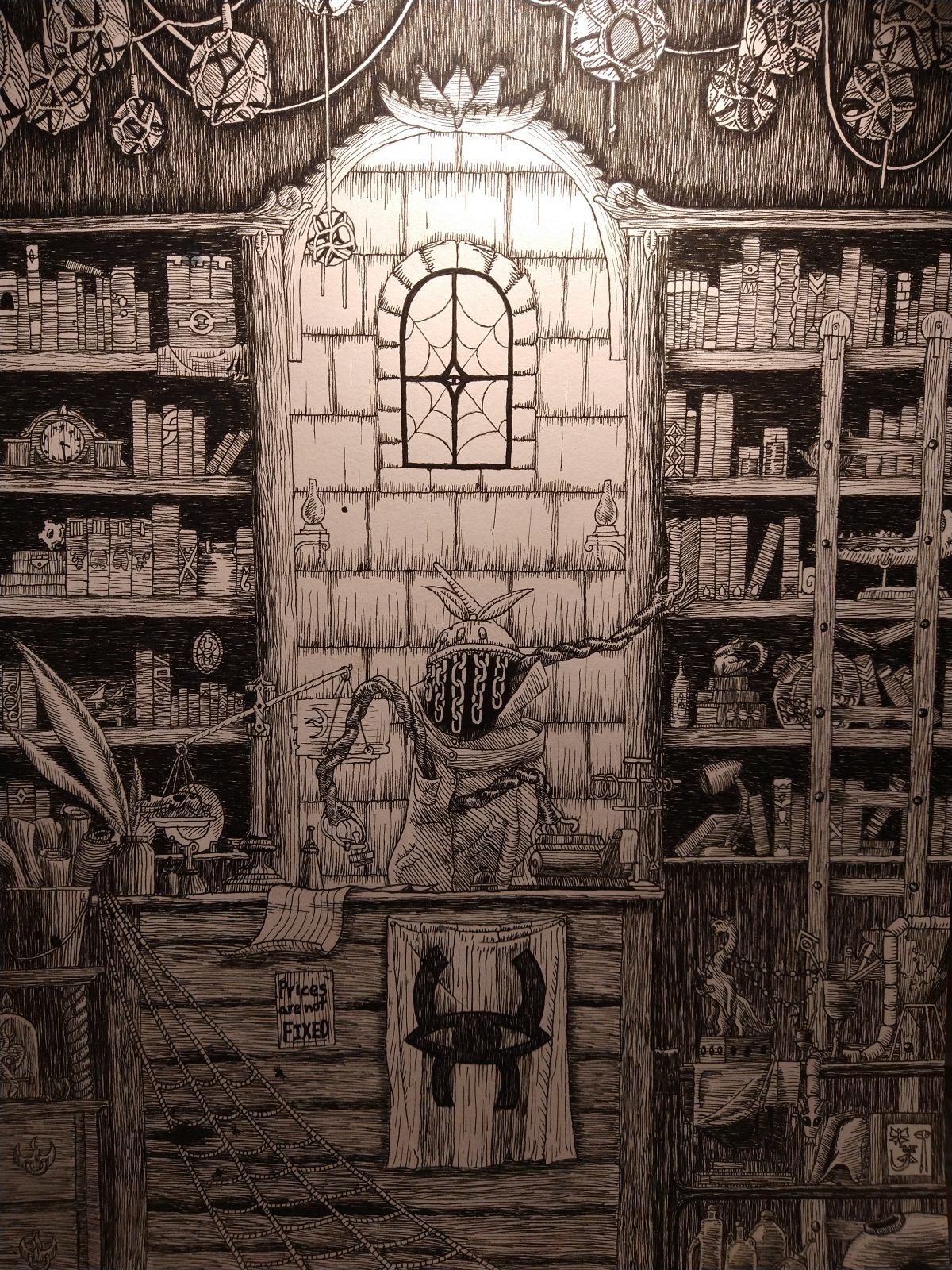 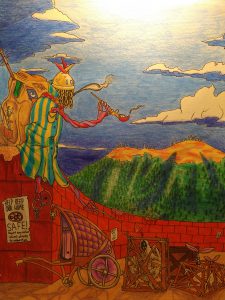 …The only shop in Toile City that remains untended to by children is the Toile Library, due to its owner being one of the few adults not required to serve in the ongoing lilarianad rally. Though, at first glance, you’d be forgiven for thinking of him as a particularly eccentric child. The caretaker in question is a short man whose species is unidentifiable due to the concealment of his garb: an old yellow and turquoise striped coat wrapped around his frame, a modified helmet from the Great Tunnel war adorns his head, and a pram always at his side veiled in fine royal silks.

Colloquially he has earned the title of “Poacher”, but on his non-existent citizenship documents, he is Hiadrance Verol. It may come as a surprise that the surrounding lilarianad towns folk leave him be, what with the current foreign conflict stirring up long-buried vitriol for aliens of every sort. But their blind eye becomes more understandable when taking a closer look at how he earned his name as Poacher.

For as long as it has existed the city of Toile has been accosted by the native wildlife that circles its walls. Under normal circumstances, this is nothing to fret over. Lilarianads are no strangers to conflict with nature itself or the occasional breach of their walls by displaced fauna, but now the severity of such an event is unprecedented. With most of the able-bodied lilarianads being drafted, the city’s only line of defense beyond its barriers are the fledgling men and women that took to running the town in their parent’s absence. If a pack of grinning lards or something of the sort were to scale the city’s walls somehow it would result in what most would consider the worst bloodbath since Lance’s Rout. Thankfully with the Poacher in tow, that will never happen.

Every day after the lights of the city fade into the night he ventures into the woods with his blowpipe and traps in hand and returns the next morning with caged baby animals piled on his back, ready to be sold. Not only does this keep the population of the native fauna in check, but it also serves as a surprising source of income for the city. Most of the captured animals are sold off to birlev gladiator rings, exotic pets, or zoos all around the system.

How exactly he traps the animals, conducts business, or how he acquired such skills remain mysteries, as are most aspects of the Poacher. Even how or when he arrived in Toile City is unknown, it indeed seems as if he dropped from the sky on some quiet night.

All of these questions and more remain unanswered, so the townsfolk often satiate their curiosity with rumors and speculation. Some think him a monarch in hiding, others see a tired war veteran who’s finally settled, and then a small few even believe him to be a cursed god of sorts.

But no matter what gossip the rabble rant and rave about, I’m inclined to believe that the more subtle details warrant further scrutiny. The wedding ring on his finger, the symbol that seems prevalent in his wardrobe, the tiny arachnids that seem to follow him, or the fact that no one has ever seen the infant within the pram. What exactly does all of this entails, I have no idea. But I intend to find out by doing what no one seems prepared to do: ask the man himself.