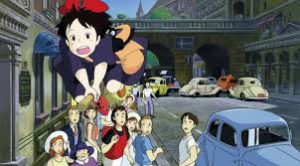 Written by Eiko Kadono and directed by Hayao Miyazaki, Kiki’s Delivery Service is one of the most iconic Studio Ghibli films. The animation and art is very beautiful, along with the cute scenery of Kiki’s first home and the home she moved into. Based off of Kadono’s novel – Witch’s Delivery Service –  the movie is about a thirteen year old witch named Kiki who has finally come to the age when witches move out of their homes and find a town of their own to train for a year, building onto their powers. Kiki and her companion cat, Jiji, find a town in which Kiki begins a delivery service after running a small errand for the owner of a bakery. Because of the service, she ends up running an errand for a sweet old lady, but when delivering the parcel to the lady’s grandchild, the ungratefulness of the child led Kiki to fall into a rut that takes away her magic.

Despite the simplicity of the movie and it’s cute antics, this coming-of-age film illustrates the feeling of being burnt out and how difficult it can be to overcome it. Kiki’s magic can symbolize any situation, talent, or such. In the beginning of Kiki’s business, she made a mistake and dropped a gift. While looking for that gift, she met a girl out in the woods working on her art who later on helps Kiki rejuvenate and find herself. The message within this small snippet of the movie is the struggles one faces when starting a new art/skill. Despite the hardships, however, you often meet the greatest friends during that journey who are also working to improve themselves and their gift. These relationships can last for a long time and in your time of artistic need, these people are some of the ones you should seek advice from – or even spend time with.

Another underlying message within was when she delivered the pie the old lady made to her granddaughter and the child’s response. The child’s ungratefulness despite Kiki’s effort to bring it to her in time – despite previous plans made – and the hard work of her grandmother wasted, Kiki became depressed and lost her magic powers. She couldn’t even communicate with Jiji anymore. What’s happening to Kiki is she’s feeling burnt out. As an artist or a human in general, there will come a time where it feels as though no matter how much effort you put into something it will always go unappreciated. This leads to becoming uninspired, burnt out, and pessimistic, especially when working too hard. In order to overcome this, Kiki went with her friend that she met in the woods – hence making good friends when going through your journey. There, she takes a break and is able to regain her powers once finding her determination again to save her friend in her new town.

Kiki teaches us the importance of breaks and self discovery when developing a new skill or art. It’s such a fun, emotional journey that I recommend everyone go on. In those 103 minutes, Kiki becomes such a beautiful soul and grows to become a mature witch. It’s such a encouraging little story. 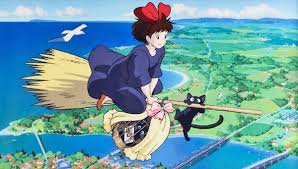