Because this is a collection of stories instead of the usually collective story, this review will be different from my previous ones. Okay? 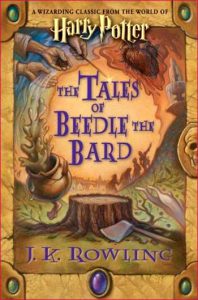 JK Rowling, of Harry Potter fame, ‘s The Tales of Beedle the Bard are a collection of short stories, or more accurately, flash fictions, for the children of the wizarding world. Most likely, Beedle the Bard is the wizard, in-universe equivalent of Muggle,  or non-magic, storytellers, Hans Christian Andersen or the Brothers Grimm.

The stories are all very silly and have a childish way of explaining good behavior in a way that would make perfect scene to its target audience: children.

Story I: “The Wizard and the Hopping Pot”

“The Wizard and the Hopping Pot” tells the tale of a cold-hearted wizard. After his generous father, who had become town-famous for his literally magical healing concoctions, passes away, the son refuses to assist the poor and unfortunate Muggles surrounding. The wizard’s father’s magical cauldron begins stalking him, all while reflecting all of the Muggles’ troubles, being very noisy in doing so. When the wizard can’t take the racket anymore, he helps everyone and cauldron goes back to normal.

The Moral: The moral child wizards and witches are supposed to take away is, “Treat others nicely.”

My Opinions: The message is  supposed to be “Treat others nicely,” but the problem as the wizard only decides to treat the Muggles nicely  when he’s been tortured into it. As a result, children could potentially take away the message, “Only treat others nicely when it is convenient to you.”

Short Summary: In the Fountain of Fair Fortune, there is a competition to get the honor of bathing in a fountain of luck, three unhappy witches and a very unlucky knight go through trials to see who will do so. Spoiler warning: (but it’s so obvious), the knight gets to do it. Also a spoiler warning: the fountain has no magical ability whatsoever.

The Moral: The moral you’re meant to take away from this is, “You make your own luck.”

My Opinions: This was truly a story for children. There was not one bit that was unpredictable. There are terrible loopholes to get around the established rules and there is a pointless romance tossed in at the very last second that did nothing for me.

Short Summary: “The Wizard’s Hairy Heart” is about a warlock who removes his heart and locks it away in a dungeon so that he will never become a fool in love. Years later, he overhears servants insulting his lack of a wife and begins pursuing a maid. She is flattered by his cold words, but tells him he seems heartless. The warlock shows her his heart and when she begs him to replace it, he does. The heart has basically rotted and makes him perverse and malevolent. He kills his new bride and then himself.

The Moral: I’m actually a little stumped on this one. Maybe, “You need love in your blasted life?”

My Opinions: This is the darkest of the tales and more like the Muggle Hans Christian Andersen and Brother Grimm’s stories.

Short Summary: “Babbitty Rabbitty and Her Cackling Stump” is about a foolish Muggle King who declares magic treasonous, but wants to learn for himself. A conman pretends to know magic and embezzles riches from the King, while teaching him fake spells. The washerwoman, Babbitty, a real witch, sees the ridiculousness of the lesson and embarrasses the King by laughing at him. The King forces the conman to hold a ceremony at which he (the King) will perform for his subjects, else the conman will lose his head. The conman makes Babbitty do the magic behind a bush, and all is fine until Babbitty is unable to do spell. The conman accuses her of being an evil witch and she transforms into a tree. The soldiers try to chop her down, but she claims that axes cannot harm magic-wielders and tells them to chop down the conman to prove it. The conman confesses all and is presumably killed. Babbitty “curses” the land, so the King strikes the magic ban.

The Moral: “Don’t discriminate.” and “Don’t lie or steal.”

My Opinions: I thought this story was the most childish one, and I won’t read it again.

Story V: “The Tale of the Three Brothers”

The Moral: “You can’t cheat death.” or “Don’t trust strangers.”

My Opinions: I’m biased, beacause I already know this story from the Deathly Hallows and I love it.

If I were to describe my writing style, it would be... volcanic. Most of the time, I sit, looming, silent, harmless. My writing is generally romantic, pleasing to the eye. I imagine a scenario that in my opinion would be mutually satisfying. But every now and then, maybe after a particularly odd dream or an especially horrible day, I will erupt. And these eruptions might last for a long time. My writing devolves, or evolves, however you choose to view it, into madness. Scrawls of controversy and scribbles of the chaos of my inner mind. That is my best writing, and I can rarely summon that at will, which means, I have plenty of room to improve. But then again, don't we all? View all posts by Jordyn Harper