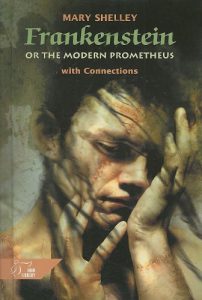 In 1818, Mary Wollstonecraft Shelley wrote Frankenstein; or, The Modern Prometheus (now simplified to Frankenstein). It is a Gothic horror fiction book that stars the titular character, Victor Frankenstein, (not to be confused with the creature, commonly known as Frankenstein) genius but lonely scientist who becomes fascinated with the secret behind life. He decides to create life himself, unnaturally in the form of the 8-foot tall hulking monster (but he’s not really a monster!). He regrets it the moment The Creature opens his eyes and abandons him. From there, because of Frankenstein’s neglect The Creature, disastrous events occur.

Rating and Its Effect on Me:

I’m going to do something different. I’ll give a rating first. I HATE this book. 2 out of 10, and it only gets that is the…

Frankenstein is a very well written book. I enjoyed its manner of speaking. Most famous novels are black or white, Shakespearean language that’s difficult to comprehend, or JK Rowling, easy to pick up because of the currency of the speech. Mary Shelley sits right in the gray area of that scale. The pretty wording truly is pretty wording, but it is not too elaborate for a modern reader to understand.

VICTOR FRANKENSTEIN IS THE WORST FICTIONAL PERSON IN EXISTENCE.

Now, that I have that of my system, I’ll try to approach this rationally.

Over the years, scholars have argued who the true villain of Frankenstein is, The Creature or Victor. I have to say Victor Frankenstein is. He is the one terrible thing about this book.  He blames The Creature for things out of his control. His hurtful words make The Creature become the Monster. He neglects his family, friends, and fiancee in favor of his precious work, who ironically enough is the very Creature he places the blame his misery and un-health upon. He isn’t a strong character; his constant inability to deal with life (fainting, making himself sick, going senile) annoyed me to no end. This is especially terrible because towards the end of the book, he decides to track The Creature to kill him. I couldn’t take him seriously. Victor’s only saving grace is that if weren’t in the story, the story wouldn’t exist, and that’s not a very nice compliment. If I don’t like the main character, how can I like any of the book?

Here’s How– A Really Small (but 8-foot tall) Positive:

The Creature is very best character in the story– with  the exception of perhaps Henry Clerval, who unfortunately isn’t in the story for long. He is nothing like I expected him to be, like his 1931 Hollywood counterpart. He is extremely intelligent, and quick learner, and an optimist. That is, until he is pushed to the brink of the madness. Eventually, he does kill, quite a lot, but at no point does he have no cause to do so. Even if it is for a petty reason, I understand his every action. In fact, every time he murders, I found myself pitying The Creature, instead of the character who was supposed to pitied, Victor. He was a magnificent character.

I suppose I ought to mention the strange framework. It might be off putting. It is a story written by Mary Shelley, narrated by Robert Walton who is telling his sister, Margaret, the story Victor told him, who in his own story includes the story The Creature told him somewhere in the his own story.

… It’s difficult to explain, but not so much while reading it. Even the reader can wrap his/her head around this idea, they are in for a very good reading.

I rate this story 9 out of 10 stars, for it’s amazing storytelling, and very good characters. (Note: Victor is great character, but a terrible person.) I probably won’t ever read it again though, thanks to Frankenstein.

If I were to describe my writing style, it would be... volcanic. Most of the time, I sit, looming, silent, harmless. My writing is generally romantic, pleasing to the eye. I imagine a scenario that in my opinion would be mutually satisfying. But every now and then, maybe after a particularly odd dream or an especially horrible day, I will erupt. And these eruptions might last for a long time. My writing devolves, or evolves, however you choose to view it, into madness. Scrawls of controversy and scribbles of the chaos of my inner mind. That is my best writing, and I can rarely summon that at will, which means, I have plenty of room to improve. But then again, don't we all? View all posts by Jordyn Harper