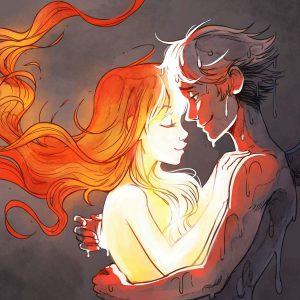 Based on the art of Gabriel Picolo

He met her at the darkest hour,
and even in her flickering light,
she was brighter than any fire.
“Why are you here?” asked Icarus.
“To think,” said the sun.
“About what?”
“Nothing.”
“I’m troubled, too. Take a seat.”

He let her into his heart
the way she let the moon takes her place
—slowly, quietly, while he was sleeping.
Curled against her, her hair hot against his chest,
his arms cocooned around her flames
and their fingers locked together in a searing hold.

Sometimes he melted too much to handle, and he crept away in the quiet.
She dimmed without him.

It took longer for her to do the same.
She’d said, “Let me in.”
He’d asked, “Can I?”
For forever, it seemed, she had her back to him,
too busy in her own starless world,
in her memories and the black hole in her chest.
She finally turned around,
and her world twinkled once more.

She was a rose-tinted mirror.
In her presence, she mended him.
She turned his bare roots into wings
and his marks into wax.
He told her once.
“I’ve got scars that can’t be seen.”
She shook her head and kissed his cheek
and the wax melted.

Once, when she felt calm enough not to burn,
he let her into the greenhouse.
She saw the words written on the short, prickly things.
Lifting “Puzzled” into her hands, she asked.
“My own fears and demons,” said Icarus.
“I get acquainted with them.”
He showed her a few.
“Lonely”—introspective, but likes new things.
“Anxious”—not talkative, but sincere when needed.
“Overthinker”—an asshole.
He did not show her the one tucked in the corner.
“Love”—never watered.

Once, as they walked through the darkest hour,
the sun said, “You don’t want me.”
“Why not?”
“I’ll hurt you.”
She told him how they’d travel over flatlands to distant hills,
to chase the moon.
He thought that was stupid.
He loved it
and ignored her unspoken plea.
“Don’t get too close to me. I’ll burn you.”