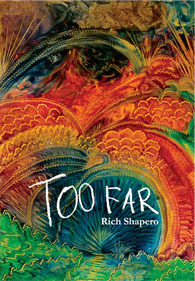 Too Far follows six-year-old Robbie, a child with a lot of imagination and nowhere to put it, living in the Alaskan countryside. Robbie’s parents are in a failing marriage—his father encouraging his curiosity, his mother determined to keep him confined to the house. One day, on a whim, Robbie travels out into the forest and meets a girl named Fristeen. Fristeen is colorful, chipper, and utterly wild. Fristeen is under the care of her easygoing but spacey mother, Grace. Fristeen and Robbie form a tight bond, and the two travel into Too Far, their make-believe wonderland. In Too Far, there is a red lake, a tree named He Knows, a forest of Bendies, and the benevolent but mysterious Dream Man and Dawn. Although Too Far becomes the children’s escape to joy, they soon realize that they can never escape reality, as it soon creeps into Too Far.

Too Far is a book that is told in two parts: Too Far and the real world. The real world is easy enough to understand, albeit told through children’s eyes. Robbie and Fristeen’s parents are presented the way a child would, through very opinionated eyes. To Robbie, his mother is controlling and boring, not wanting him to travel out into the woods, but to readers, we understand where her maternal fear comes from. Robbie sees his father as fun-loving and supportive, though we may think him to be too loose with his child. Robbie looks up to Fristeen’s mother Grace as a wise, mystic woman who is as easy-going as it gets. We, however, see that Grace is often drugged out of her mind, and though she loves her daughter, she also pays no mind to her safety. Framing these characters through Robbie’s and Fristeen’s eyes works both ways: we see them as the flawed humans they are, while we also see how tragically idealistic the children are.

The second part of the book, Too Far, is told in a very mystical, fairy-tale way. There’s a tree named He Knows that talks, a ‘bouncy lake’, etc. Although we as readers know that these are simply fragments of the children’s imaginations, they are treated as fact. The characters of Dawn and Dream Man may seem confusing at first, but as the book continues, it becomes clearer that they represent the children’s parents: they love them, but they don’t always make sense, they do bad things and don’t apologize, and they bounce between caring for and pulling away from the kids. It also becomes increasingly clearer throughout the story that Too Far is more dangerous than the children realize. Playing out in the woods is all fun and games before the reader realizes, “Oh, yeah, these are two children completely unsupervised in a place where they could die.”

Without giving away spoilers, the book does end on a very somber note, albeit not one that doesn’t make sense. In fact, as readers, we may consider the ending to be bittersweet, though it’s a tragic one for Robbie and Fristeen. I think the book overall captures the imagination and innocence of children, while also capturing the adult fear of “These children have no idea about what a bad situation they’re in.” Also of interesting note—the book has a soundtrack! Dawn Remembers is an album by Rich Shapero and Maria Taylor made with the book in mind. Cool.

On a more negative note, there are some slow parts in the book, wherein Robbie and Fristeen are just moseying around Too Far. Now, arguably, this is because they’re two bored kids with nothing to do, but it still makes it a tedious read. Especially noticeable in that the kids follow a sort of pattern every time they go into Too Far. Some scenes with Dawn and Dream Man can be a bit hard to decipher, as they are two unreal things being treated as real—in other words, though they are in the children’s imaginations, they seem to have real-world effect.

And of course, the most controversial part of the book—two kids in a sexual relationship! Robbie and Fristeen never actually have sex…or, if they did, it was too ambiguous to tell…but there are parts where the six-year-olds become…acquainted with each other. Kids learning about sexuality is a really tricky thing to write on. It happens, we’ve all been through it, but it’s very uncomfortable when done wrong, and it can very easily be done wrong. And Too Far’s depiction of the situation is…fine. No, I did not enjoy reading about two children getting naked together, but it could have been way worse.

All in all, though it can be difficult to understand and slow to process, Too Far does give a very interesting take through a child’s view. It is imaginative, worrying, and hopeful at the same time. I understand that it is a very divisive book, though, so I’d day look at a sample and see if it interests you.