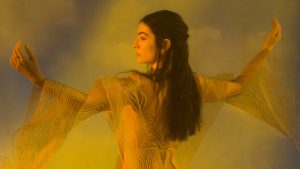 This is the last installment of my analysis on Lorde’s Solar Power album. As with my last two parts, just as a disclaimer, this is my initial listen on all songs. I’ll then be giving my raw thoughts afterwards as I interpret the song. Last post, we stopped on “The Man with the Axe” which leads us into “Dominoes.” Feel free to listen along to the album songs as you read my thoughts on them. Links will be provided. 🙂

I’m so glad I got the opportunity to delve deep into looking at all the little gears that turn for this album to work so well. I’ve always been a fan of Lorde since her debut album, and nothing has changed after hearing this one.
Also, thanks for reading! I hope you enjoyed this as much as I did making it.
I obviously can’t wait to see what she does next. Until then though, I think she’s taught me to just live in the moment and until the moment comes: “Breathe out, and tune in”  ♥